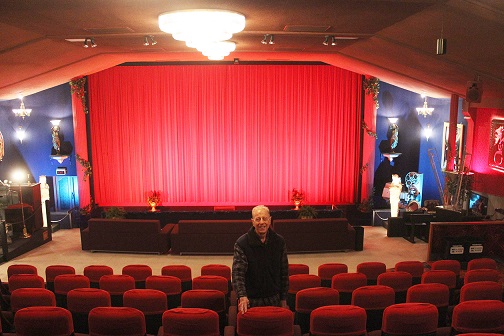 “There’s been a lot of interest in when we’ll be back up and running, owner operator Allan Webb told the News.

“We’ve made the call – and it’s a tough decision – but we’ve decided to hold back and give people the best experience we can offer.”

He said factors like social distancing which made theatre use impractical, combined with difficulties securing films on a schedule which had practically been wiped clean thanks to the pandemic, made July call the wisest solution.

A government announcement this week increasing the size limit on all gatherings from 10 to 100 as of noon tomorrow would not change his plans, he said.

While he said he was fully committed to following Covid-19 regulations, he was hopeful such rules would look different by July.

Additionally, as the effects of the pandemic began to be felt world-wide, films dated for release which Allan had been relying on to draw the crowds were either pushed back to later in the year or into 2021.

Most had been pulled altogether.

“In a word, if I had to describe how everything feels at the moment it’s ‘uncertain’.

“I had a full slate of movies through until Christmas.”

Films like James Bond: No Time To Die, Trolls, Peter Rabbit 2: The Runaway, The Fast And The Furious, A Quiet Place 2, Black Widow and many others were forming a key part of his 2020 plans to draw the crowds.

“Then, just like that, we started to lose films. The week leading up to lockdown was in all honesty probably the worst week we’ve ever had.”

And that’s saying something – Allan’s been running the Regent for more than 46 years.

After having the probably the “best ever” school holidays, the last time students took a break, the lockdown, coupled with inclement weather had meant several key releases normally hugely marketable for Allan had been missed opportunities.

“If we get a good run over school holidays we can get possibly three times the amount of people we do on a normal day.

“But Lockdown also meant we weren’t open for dates like Anzac Weekend and Easter,” he said

He was grateful for his team of 10 part timers – all of whom had been able to be retained thanks to the government subsidy.

It’s not all doom and gloom though – Allan’s been buoyed by the support Te Awamutu has shown him.

He’s hopeful dates on the movie-going calendar like the July school holidays will help them find their feet swiftly once they’re open.

“We’re determined to be back – over the years there has been so many times when the community has been there for me. They’re incredibly loyal and I appreciate that.

“So now, I want to be there for them,” Allan said.

“We wanted to bring some normality back into people’s lives, we’ve had such a fantastic response from the community.”