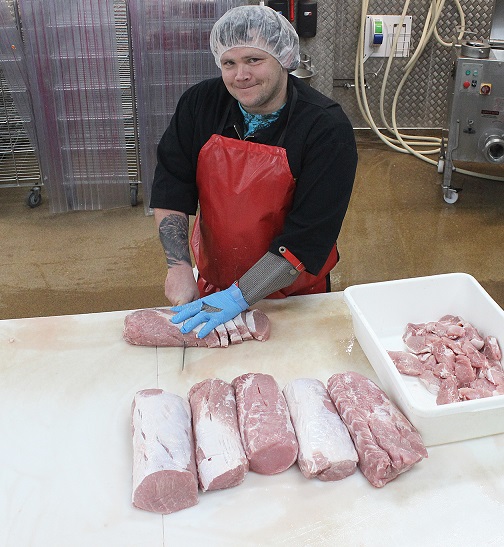 Te Awamutu’s James Beattie wants the way he undertakes his craft to be a cut above.

It’s with that goal in mind the third-year Pak ’n Save Te Awamutu apprentice butcher has entered the 2020 Retail Meat New Zealand Anzco Foods Butcher Apprentice of the Year competition.

He took part last year too – only missing the final by the closest of shaves.

James only decided in the last day or so that he would enter this year.

This year the competition – happening slightly later than normal because of the Covid-19 pandemic – commences with regional heats in Auckland, Hamilton, Wellington, Christchurch and Dunedin.

Hamilton’s regional qualifier is next month at Mill St Pak ’n Save.

James – who will complete his apprenticeship by the end of the year – and the other apprentice contestants will race each other, as well as the clock, and prepare and display a size 20 chicken, a whole pork leg and a beef short loin.

Contestants are awarded points based on how well they complete those tasks – with the top scoring Alto Young Butcher and Anzco Foods Butcher Apprentice from each regional event progressing to the final.

Additionally, six other wild card entries will be selected, to make up a field of 12 finalists all told.

While James didn’t qualify to compete in the apprentice final last year, he did take the opportunity to go and watch – gleaning learnings from the experience.

Now, with those lessons learned and “two small things” to improve on from last year, James wants overall glory in 2020.

“The things I got marked down on last year were that when I was preparing my roast and binding it together, the knots I used were pointing up. I should have had them pointing down.

“With my beef, I left too many cuts of meat on the table.

“I guess the main thing competing showed me is that there are a lot of really good butchers out there,” he told the News.

While completing his apprenticeship at Pak n’ Save, James has trained under butchery manager Brendan Alexander.

“The Pak n’ Save team is always supportive of me. “I really love that butchery is a very diverse industry,” James said. “No two days are ever the same.”

His butchery skills are diverse too, given a background in hunting.

“The retail side of butchery is fantastic, but I also like the fact hunting has given me experience in processes like curing meats.”

Looking ahead beyond his apprenticeship goal wise, he has been working on starting his own home kill business.

The grand final is in Auckland in October and, in a competition first, the Pure South Master Butcher of the Year competition has been added to the line-up.

It will see six butchers compete in a cutting test.