Sam pools her talents for refugees 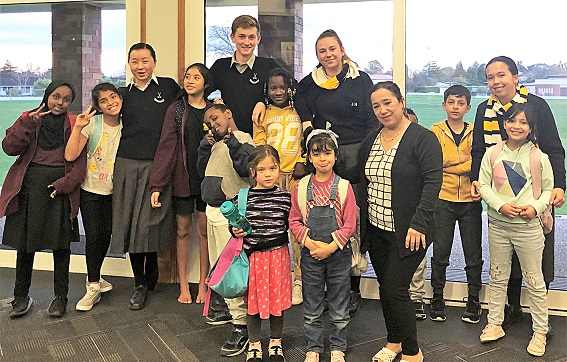 Sam White (back right) and other volunteers with some of the refugee children being supported through the St Paul’s Collegiate after-school programme.

Te Awamutu teen Sam White has an impressive swim stroke and a heart to match.

Ten days ago, she kick-started an initiative to collect items for refugee children eager to assimilate with New Zealand life, posting a call for barbie dolls and Lego on the Te Awamutu Community Grapevine’s Facebook page. She was overwhelmed with replies.

“I am really amazed at the response,” Sam said, just four days later.  “I thought I’d put the message up and see what came out of it, but it’s been amazing.  Within a couple of days, it had over 200 ‘likes’, with most people asking how they could donate, and others just wishing me well with it.”

Sam, 16, is a Year 11 boarder at St Paul’s Collegiate in Hamilton. She is also a competitive swimmer and a girl whose own desire to help others perfectly matches the school’s ethos.  One of the many ways St Paul’s demonstrates that is through the after-school sessions it hosts where student volunteers, including Sam, help primary-aged refugee children from the surrounding community. They spend a couple of hours helping them with their English and any homework they might have, and just have fun.

One day, Sam asked what games they might like to play, and was moved to action when a five-year-old girl asked if they had a barbie doll she could play with. That comment spearheaded Sam’s decision to pop something up on Facebook, and generated the resulting flood of barbie dolls, Lego, books and other toys which Sam boxed up and took back to the school.

This whole ‘giving back’ thing isn’t entirely new to Sam.  Her parents are “all about helping people”, she said, and while Sam was still a student at Te Awamutu College, she and her younger sister Michaela, also a competitive swimmer, did a ‘togs drive’ for Auckland-based schoolkids who didn’t have swim togs of their own. The girls ended up collecting over 70 pairs of togs as well as towels, goggles, caps, rash-shirts and tog bags.

She was also involved in a ‘boarders-in weekend’ activity during Lockdown, a charity relay that raised funds for the charity, Flame Cambodia.  At the same time, day-students did the World Vision 40-Hour Famine.

Sam loves St Paul’s proactive stance on service to others, and is basking in the entire ‘boarding’ experience. She reckons a three-month exchange to Australia last year, done through the Rotary Australia and New Zealand Student Exchange programme, made it a lot easier to transition from day scholar to boarder.

Volunteering time with the refugee children is one of the highlights of her week, and she wouldn’t rule out another ‘collection’ initiative down the track.

“These children come from all over the world … some of them have been through really tough times. It’s great to have the opportunity to do something for them,” she said. “I love being able to help people out – it gives me a real kick.”