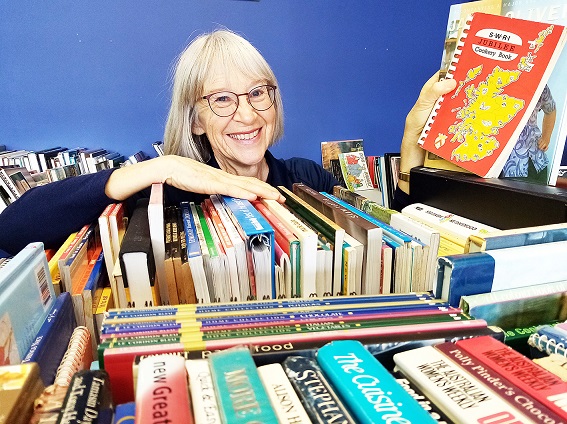 Te Awamutu Rotary Book Fair convenor Laurel Smith amid some of the hundreds of books donated for this year’s fair.

Even as the tables creak under the weight of books already in, the message from organisers of the 2020 Te Awamutu Rotary Book Fair is clear – keep them coming.

That’s because they know how fast they’re likely to go this year, particularly given that the 2020 fair will run over eight days as opposed to the three or four of previous years.

Rotary Book Fair convenor Laurel Smith said as a result of the Covid-19 pandemic the 2020 fair was moved from its early June slot. It will now be held from August 22 to August 29 at a new venue – 363 Alexandra St, the premises previously occupied by Dave Gibson’s Locksmith and Gunshop.

“This is our first year here, and although it’s a smaller location than we have used in the past, it has the advantage of being in the main street.  We made a record $14,000 last year, and we’d really like to top that this year.”

The range of books already in is extensive – from gardening, cooking, life stories, fiction, crafts, children’s books, history and more.  Those in the New Zealand category are always particularly popular, said Laurel. The team is looking for more of the same, as well as CDs and DVDs and jigsaw puzzles.  The more they have in stock, the easier it will be to refill the tables as books sell.

The fair will be open from 10am to 4pm each day.  Books will be sold at $3 each or $10 for 4, and on the last day of the fair, banana boxes of books will go for $10 a box.   Books not sold will also go to a good cause; many are collected by Waikeria Prison librarian Leigh Gilson for use in the prison libraries.

Laurel said community response to earlier calls for books had been excellent and said further donations would be accepted right up to the fair itself.  Books and other items can be dropped off at 363 Alexandra St (from 9am-11am on Monday, Wednesday and Friday), and at Mega Mitre 10 Te Awamutu during their hours of opening.

Interlock Waipā, the Cambridge-based initiative launched last year for those living with disabilities, has formalised its status. The InterlockNZ Trust was incorporated in late May, spearheaded by the man who founded Interlock last July, well-known disability worker for 35 years, Aaron Ure.  Joining him as…

Residents around Karāpiro Piarere would support a toll road if that’s what it takes to get the Waikato expressway extended to the northern boundary of South Waikato. A straw poll at a community meeting last…