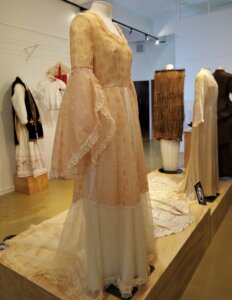 The detailed style and soft colouring of a gown from the 1970s.

An exhibition of clothing inspired by the way our lives changed during Covid-19 lockdown is attracting attention at Te Awamutu Museum.

Formal Fridays, as it has been called, shows a range of clothing from the 1840s to around the 1970s, profiling the dress code of the day and including formal and wedding attire, uniforms, daywear, and taonga Māori.  Rolling screened images and accessories displayed alongside the textiles brings the exhibition together in a feast of visual nostalgia.

A brown silk taffeta wedding dress with a detachable bustle is thought to be circa 1850s; a rich cloak embroidered with thistles is a Scottish import from about 1840;  there are wedding dresses from the 1920s and one from the 1970s;  christening robes and a page-boy outfit; a nurse’s cloak and WW2 soldier’s uniform; sixties daywear; korowai and kete.

The museum’s collection manager Megan Denz said the team decided to mount the display as they mused on how people coped with lockdown by ‘dressing up’ one day a week to go walking or make their zoom calls – hence the ‘Formal Friday’ moniker.

“We chose to create an exhibition in response to how our lives changed during lockdown, when working and being home all the time resulted in a change of dress standard,” she said. “I lived in active wear for the whole six weeks. I also noticed through lockdown that television announcer Hilary Barry started the online trend of #Formalfriday, where she would wear her best wear for work, online zooms and her own social media. The trend went viral. I thought the idea was great … we wanted to do something fun and whimsical, particularly after the year we’ve all had.” Some of the children’s pieces on the exhibition.

When the country moved to level two, the team used the opportunity to go through the museum’s fashion collection.  “We went through over 200 boxes … assessing donated items for condition, then photographing and cataloguing them.  Some of them are included in this display. Not only are they fascinating to look at, but there are some wonderful stories behind them.”

Megan hopes the series of images running on two screens set up as part of the display, and showing old images of individuals and groups, might bring more of those stories to light. “We would like people to let us know if they can identify people, places or dates around those images,” she said. “It would really help us fill in the gaps.”

The museum’s exhibitions co-ordinator Henriata Nicholas said the exhibition was a fun way to uncover and showcase these textiles. “Lots of hours have been spent just preparing them for public viewing.  We had a team member sewing arms for our mannequins, another intricately steaming beautiful silk wedding dresses, and preparators making exhibit stands and plinths.” 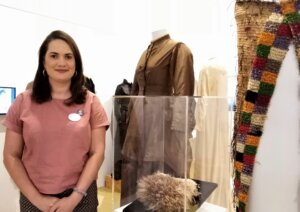 Te Awamutu collections manager Megan Denz with some of the fashion items currently on display in the Formal Friday exhibition.

The exhibition opened at Te Awamutu Museum on October 3, and will run until the end of March.