Waikato won both the Girls and Boys New Zealand Lacrosse U15 National Championships at Tamahere Park over Labour Weekend – and also collected silver medals in both.

It was an exceptional outcome for the region, and testament to the depth of players at this level from the strong ongoing U15 development programme in the Waikato.

In the Girls’ tournament, Waikato Gold prevailed in an epic struggle with Waikato Red.

Coach Melissa Gratwicke said her team was “hungry and gritty, and they just fought for everything”.

“They weren’t giving anything, they really had to dig in. They started out, got behind and didn’t have a great start, but managed to dig in, pull it back, and take on a good lead.”

Gratwicke, who plays for Hartford University in the US on a full lacrosse scholarship coached at this tournament in 2017 and was impressed at the lift in standard.

“These girls are U15 and I am just lost for words. They are just so talented, and they work really, really hard for it as well.” 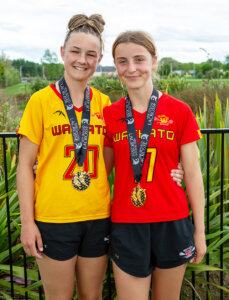 It was “good to see the Waikato boys get up and finish the tournament with a win. Obviously being a Waikato native, I take that to heart. It’s a good victory for us.”

The New Zealand U15 National Lacrosse Championships runs annually and alternates between the Waikato and Auckland. The tournament will return to Auckland in 2021.