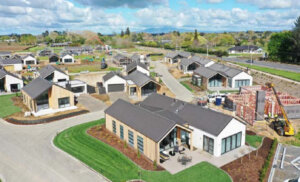 Interest in the Tamahere Country Club, under construction in Airport Rd, has encouraged the Sanderson Group to try the same model in Te
Awamutu.

The company behind plans for a new retirement village in Te Awamutu was spurred on by the success of a project just a few minutes’ drive away.

The Sanderson Group’s development Manager Nathan Sanderson said that following the “unpresented success” of Tamahere Country Club, the group lodged a private plan to enable a new retirement village to be built “in arguably the most desirable location in Te Awamutu”.

The News reported last week that the group had lodged the plan change with the Waipā District Council.

Sanderson Group hopes to start work on the new village late next year and have residents living there by mid 2022.

Nathan Sanderson said the Group was proposing to bring “one of the finest and most luxurious retirement villages” to Frontier Road in the T2 growth cell.

“We have seen unpresented demand for our Tamahere Village and a number of these residents have come from the Waipā and King Country areas. Following the notification of the private plan change we have already been inundated with new enquiries.”

He said the Group was encouraged by the site, which had“magnificent” views towards Pirongia, was close to Te Awamutu and retail facilities.

The village homes will start in “the
early $600K bracket”.

“Te Awamutu currently has a limited supply of retirement options and an aging population so we know the demand will be high,” he said.