Meth in the neighborhood There to help: Ryan Fleming pictured with members and supporters of the Anti-P ministry who set up a desk in Alexandra Street every Wednesday. They are, from left, Tim Varey Paula Woolford, Ange Holt and Donna Stanley

The guy in the red cap looks up, grins and waves to Ryan Fleming.

“We’ve arrested him a few times,” Constable Fleming explains. “He has a health issue, so we know to just keep chasing him rather than catching him too soon, because he can get violent. Once his health issue kicks in, he just gives up.”

Red cap man is one of several who acknowledge Ryan in his unmarked car during a three-hour tour he is giving the News.

This is no tourist hike though.

We are driving around Ryan’s patch in Waipā and I’m getting to see the houses where meth has a hold.

Some are neat and tidy, more reflect the mess the occupants find themselves in.

Most are on first name terms with Ryan. He and his colleagues have probably arrested all of them at some stage in recent years – but there is no hint of animosity.

“My father was a policeman. He said there are bad, mad and sad… most of those I deal with are not bad,” he says. “Most are addicted to meth. They don’t want to be where they are, but they are addicts and it has them in a vice.”

Meth knows no boundaries in terms of rich and poor. Ryan recounts the story of a group of relatively well-off people who decided to experiment on a holiday. A year later one of them was in the grip of a gang, addicted and heading to jail – his idyllic life in tatters.

“Of all the cases, that one stick out – the fall was just so quick,” he says.

How much meth plays a role in police work is illustrated by the conversations on the police radio and by Ryan putting two and two together as we drive.

He gets a call from a concerned relative and quickly deduces it relates to a car crash the night before – and he knows who will have been in the car.

“One of them is a young man who is really lost – barely into his teens and he is probably the town’s most active burglar,” he says.

We head up to the cemetery where there have been complaints of groups getting up to no good. In a car a group of teens are supping on Woodstock bottles and are told to ditch the contents.

The boys acquiesce when it’s explained they can keep the unopened bottles – but will have to move on.

It’s a young man Ryan has been working with. Ryan is out of the car and greets the youngster warmly.

“He’s a good kid, I’ve got high hopes for him – he’s just enlisted for the army,” he says.

Back on the streets we stop at house after house, each with a different story to tell. At each house Ryan notes the cars – only once on the “tour” does he spot one he’s not familiar with.

The number of stops and individual stories of drama, follies and occasionally fatalities, is getting into double figures.

Some houses are owned by the occupants – usually handed down by a parent who now laments having no control over the property or the behaviour of their child.

“My father was a policeman. He said there are bad, mad and sad… most of those I deal with are not bad,” he says. “Most are addicted to meth. They don’t want to be where they are, but they are addicts and it has them in a vice.” — Ryan Fleming

“It’s a bit easier when they are Housing New Zealand and rental properties from our perspective when it comes to taking action,” he says.

The nods and waves continue.

Up and down the country neighbourhoods are blighted by the meth plague.

“Te Awamutu is not better or worse than others in my view,” he says.

We chat with a couple of them and Ryan has a few more pieces to add to this week’s meth jigsaw puzzle.

One neighbour is pleased to hear an eviction notice is about to be enforced.

For all the mess at these houses, though, many of them do a regular trade – cars come and go at all times of the day as sales are made.

Ryan doubts whether any of the people we see make anything more than enough for their next hit.

But they are not completely disorganised.

The cars are rarely queuing up when he is around.

“Lots of them have scanners. It’s not illegal.”

Ryan jokes he occasionally gives a “shout out” to the listening audiences over the police radio. He is, of course, the author of our weekly On the Beat column who once invited the owner of a small pot plant he found basking in the sun on a patio to come and discuss its absence with him.

You have to have some humour to do this job.

But there are hairy moments and Ryan has had a few. Beyond the mad and sad, he’s encountered some of the bad. He’s had a loaded gun pointed at him. He points to homes where the meth trade has resulted in killings.

“The community here – most of them are not bad, but they’ll kick off. And you’ll have a couple who are mortal enemies one minute living in the same house the next as one get kicked out of their previous house.”

He has empathy. One has been in some bother this week and it appears she had fallen off the wagon – but he’s hoping her explanation is genuine.

“I really do, I hope she’s stayed clean.”

He is not going to cross any boundaries, but he supports alternative ways to dealing with addicts by helping them rather than jailing them. 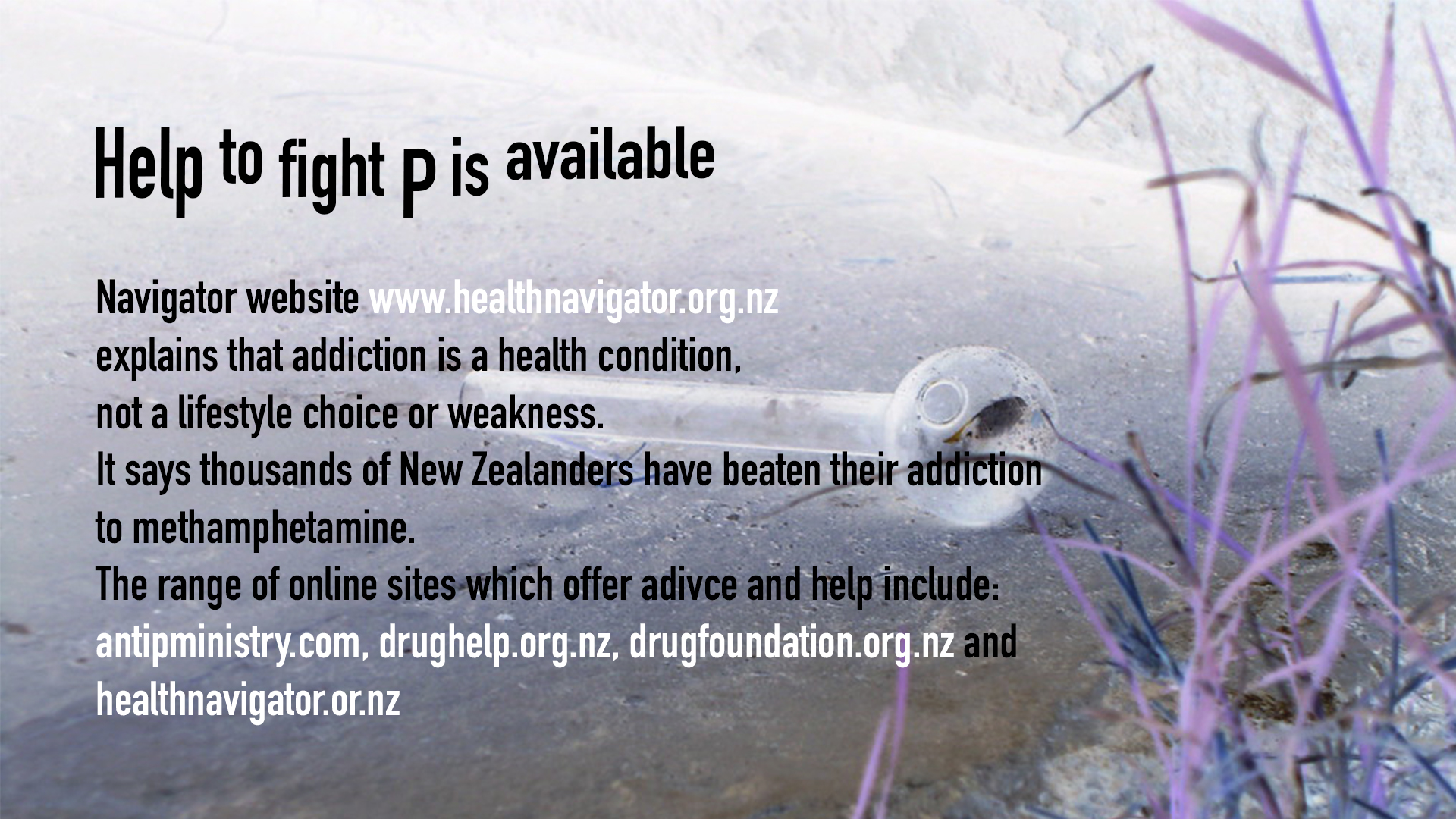 That’s why he is a strong supporter of the Anti-P Ministry, a group set up 13 year ago – 7-7-7 to be accurate – by a recovering addict.

That group offers ongoing help to addicts who want it – and it has a weekly walk-up desk in Alexandra Street.

“Its members understand – so much more than I can – what it is like to be addicted to meth. I urge anyone who can be helped by them to make contact.”

Our tour has been an eye opener.

“Any police staff could have given you this tour – we know the scene here,” he says. “I previously worked in south Auckland – it’s different here, you know everyone.

With a week to Christmas he hopes more users will talk to the likes of Donna Stanley at the Anti-P ministry to get help.

But he also knows that this is a drug that will take addicts to the bottom before they commit to getting on top of it.