Park plan gets thumbs up — thumbs down for behaviour 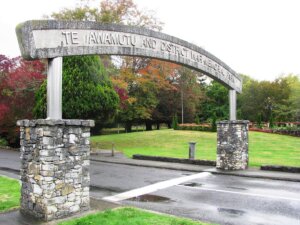 The park’s architecture could be a victim of the changes

A revised plan, at almost half the original cost, has been backed by Te Awamutu District Council for the town’s Memorial Park.

But the shadow of bitter criticism and abuse following the release of the original plan last year dominated much of their conversation.

Last week they were given the option of shelving the project or going ahead with it and funding the work from the sale of assets. They chose the latter.

Councillors appeared confident there was a strong desire in the community to see work carried out to maintain and improve the park- but part of the discussion last week leaned for a time towards further consultation.

They were confident the town’s RSA and manawhenua had discussed the plans to the point that both sides were happy.

But councillors also discussed the role of a third group, the War Memorial Maintenance Committee, which had not supported the plans.

Cr Lou Brown said two members of the committee had been asked to step down over “aggressive behaviour” and were replaced.

And Community Services Manager Sally Sheedy said efforts to sit down with the group had failed and “I don’t want my staff involved in these types of conversations.

Cr Marcus Gower, discussing the submissions made on the plan, said it had been “hijacked”.

He said he was aware of a couple of people who had influenced submitters to make comments in submissions they did not agree with.

The comments follow on from a council committee meeting last month where Cr Susan O’Regan lamented the hostility and abuse which had been aimed at council staff and some councillors over the park work.

The new concept plan for the park was approved by council in early April after there was vocal opposition to aspects of the original draft plan when it was initially released around a year ago.

Council staff produced a revised plan after 517 submissions were considered during an eight-week consultation in the middle of last year. Following submissions, the council acknowledged the community wanted memorial featured retained and restored, waterways restored and better signs.

At last week’s hearings of submission council announced that the amended version of the park’s concept plan would cost $5 million, down from the original $9 million.

Marc Dawson, who represents the War Memorial Maintenance Committee said while some aspects of the revised plan, such as the retention of the peace fountain and the entire pergola were welcome, other aspects of it were not.

“We are the town who forgot,” he said.

He says the initial 1949 plan for G.Gibbs was for a memorial park with a tree for every fallen soldier, a scenic driveway, a playground, picnic areas, an artificial lake, paths and rustic footbridges commemorating the services.

“That legacy from 70 years ago is now our heritage to cherish, not to re-concept. This amended draft plan, like the ones preceding it, has no acknowledgement for the planned, built and dedicated concept of our novel, artistic and symbolic memorial.”

Mayor Jim Mylchreest said council had listened to the concerns people had raised and the council would do a “cut down version”. For close to $4 million.

From a public perspective he said the council could say to the community that that view council was going to completely wreck the park and cut down every tree was nonsense.

As part of the Long Term Plan 2021-2031 the park plan will be considered when council approves a final document on June 29.