Watching the Waipā District Council Long-Term Plan deliberations, senior writer Mary Anne Gill was impressed at how councillor Susan O’Regan chaired the meetings, so she decided to find out more about the woman whose political pedigree runs through her veins.

Susan O’Regan was 12 when her mother first entered Parliament as MP for Waipā in 1984.

When we meet at her Judge Valley Dairies farm, midway between Te Awamutu and Cambridge, it is two days after what would have been Katherine O’Regan’s 75th birthday and her only daughter says how much she misses her and reflects on their similar paths.

The previous week Susan, 49 and husband John Hayward were in Wellington meeting Agriculture Minister Damien O’Connor and Environment Minister David Parker on the fifth floor of The Beehive. When her mother was a minister in the fourth National Government, her office was on the floor below and Susan was a regular visitor before taking on a job working in Murray McCully’s office.

So, it is an obvious question to ask. Had Susan ever thought about standing for Parliament herself?

She considers her answer carefully in a way which makes her an obvious politician – and she recalls the times her mother was away from their Te Awamutu home.

The life of a politician is one of sacrifice, it can take a toll on families and marriages, she says.

“I love politics because it’s about people. It’s not just a decision ‘selfish’ Susan has to make. But never say never. My background and my experience as a child were very formative. That whole desire to serve, see a problem, want to fix it, that runs deep. The answer to that is I don’t know.”

Eight years ago, she was asked to consider throwing her hat into the ring when Shane Ardern stood down in the Taranaki-King Country seat. The decision was made for her when she became pregnant with youngest child Jack. The couple have a blended family of five children – Emily, the oldest at 21, works on the farm, George and Ben away at university and Lily and Jack who both attend Puahue School.

“That whole desire to serve, see a problem, want to fix it, that runs deep.”

Susan’s first foray into politics came in 2016 when she was elected to Waipā District Council in the Kakepuku Ward.

“She had to do something, she’s a talented lady, she can’t be sitting here listening to me all the time,” says John.

Susan, who studied Law and a Bachelor of Arts majoring in political studies at Otago University, had been a practising barrister in Te Awamutu specialising in family law.

“When I had Lily, who is now 11, it seemed wrong to put her into day-care and rush off to look after other people’s children. My primary role was to grow the best human being I could.

Susan and John have won a clutch of environmental awards for their 240 ha Judge Valley Dairies farm. When they first moved onto the farm 13 years ago, they decided to identify unproductive areas. They fenced their waterways, planted about 30,000 native trees and regenerated wetlands. They now have 380 dairy cows producing more milk per cow than most dairy farms around. They grow nothing for cultivation so as not to upset the soil but do grow 26ha of maize feed. 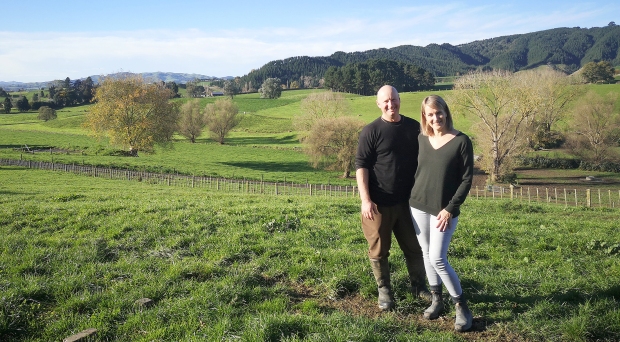 They have no intention of resting on the laurels of their award-winning farm and are constantly looking at ways to innovate while still being sustainable. 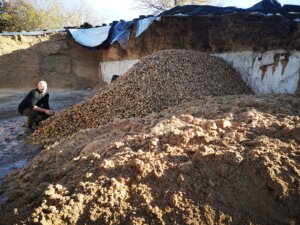 Feed for the cows including gold kiwifruit, not suitable for export and considered waste.

The kiwifruit comes from Bay of Plenty where it has been rejected for export but is perfectly fine to feed cows. It is “crazy good feed”, he says. “Perfectly fine kiwifruit, just not the right shape. Look at the water, the nutrients and everything that’s gone into developing that kiwifruit, and then it’s waste.”

It gives the cows more energy but for John and Susan, it is more about building a sustainable farm through effective use of waste.

After a learning term on the council, Susan stood again in 2019 and was appointed Strategic Planning and Policy Committee chair. The committee oversees the development and implementation of liveable spaces with a focus on promotion of the district’s social, economic, environmental and cultural well-being. It develops and implements council’s plans, bylaws, strategies and policies. 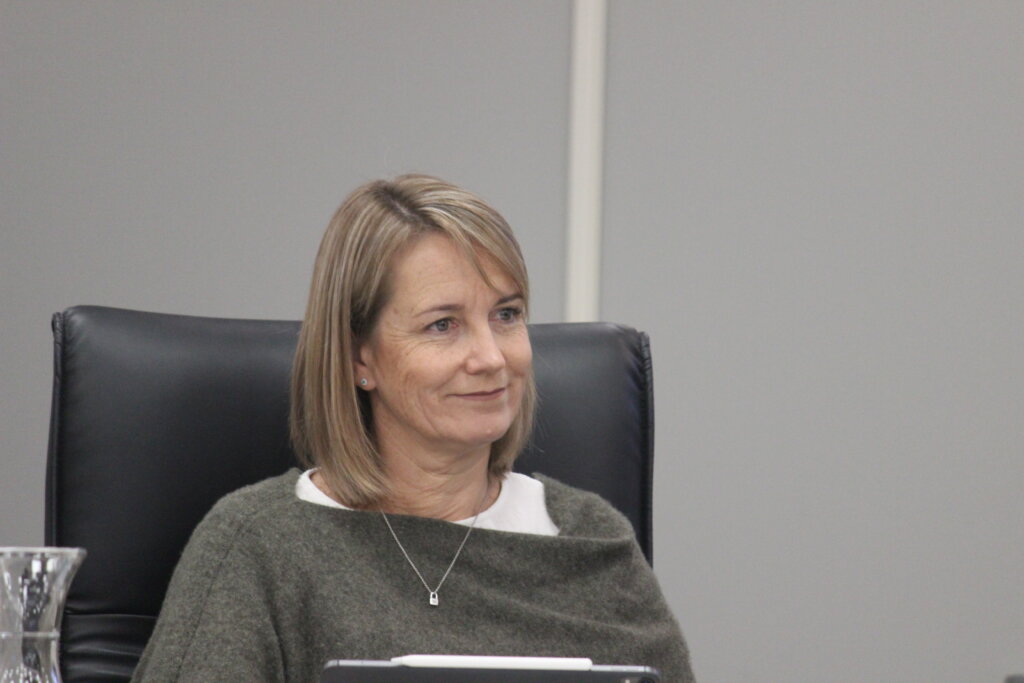 Held over four days and comprising 1505 submissions, the hearings determined council’s priorities for the next 10 years.

One issue, the concept plan for Te Awamutu Memorial Park, attracted significant debate and hundreds of abusive and vicious comments on social media.

Susan was furious and at the April committee meeting she calmly but forcefully gave a massive serve to the members of public who had subjected staff to online and personal abuse.

She read out some of the comments and says she makes no apology for doing so despite the language used.

Susan was impressed with the passion showed by submitters during the May hearings.

“I tend to not be so moved by people who are not making as much money as they thought they might. Mine is about the human part of it and the connectivity. You’d have to be pretty cold-hearted to not have some of those resonate.”

She worries about the submissions the council did not get on social issues. That is where she most resembles her mother.

“My mother always described herself as liberal in social issues but on economic issues she was conservative. She was a centrist and I don’t think I’d be too far from being in that space as well.”

“You’d have to be pretty cold-hearted to not have some of those resonate.”

A year out from the next local government elections, Susan is considering her future. One possibility is a return to family law. Another is running for mayor although that depends on what Mayor Jim Mylchreest wants to do.

“Yes, I would consider that and I’ve made no secret of that. But that’s kind of a tricky one too. I wouldn’t rule it out but it’s my understanding he intends to stand again. There are other members who I know have other aspirations but it’s a hard task to unseat a successful, popular and well-liked mayor.”

Susan admits she loves local government and considers herself well suited to it.

“There’s a lot of change coming and my sense of it is it’s a change into an area that I feel really comfortable in – play shaping, connectivity, communicating, breaking down barriers between decision makers and the community itself.

“I feel I have a lot of value in that space,” she says.

Few would argue with that given the way she guided the council through the Long-Term Plan process.

“It’s our contract with the district. It’s the reason we were there.” 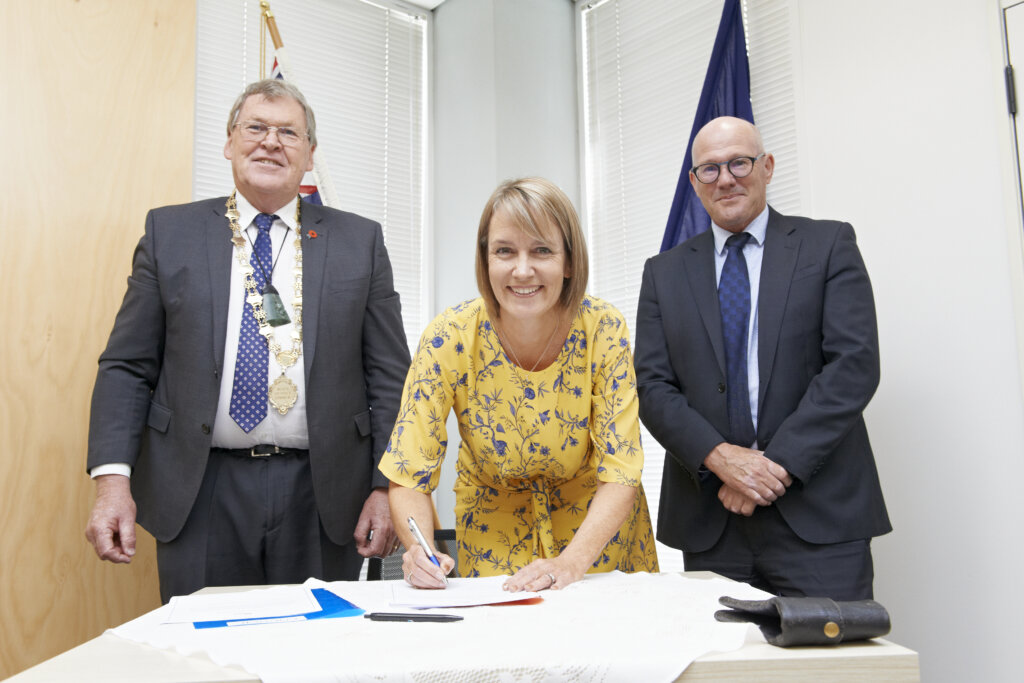 Susan O’Regan is sworn in as a councillor in 2019 watched by mayor Jim Mylchreest and chief executive Gary Dyet.