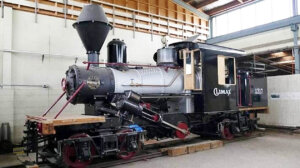 The restored engine is waiting for a home.

Te Awamutu’s Climax train engine remains at a stand still with council saying that it maybe months before a site for the refurbished train is confirmed.

The Waipā District Council says that at the moment there is still not much they could say further about the project.

They confirmed they are still working with the Climax Engine Trust and Te Awamutu Lions Club to identify the right site for the Climax Train and hope to resolve this in the coming months.

The engine is sitting in one of council’s depots and Lions club members who invested in its restoration are frustrated.

Te Awamutu Community Board chairperson Angela Holt said this issue is raised at most meetings and the board is very much behind getting it back in the public viewing.

While many locations had been presented Holt said that it seems the Bunnings site now owned by council is definitely the clear favourite.

“The Bunnings site could potentially work very well and it ties back to the fact that the original owners of the engine ran their business from this site,” she said.

This site was once owned by former mayor Jonas Smyth who donated the train to Te Awamutu.

“It would make sense to be a part of the Te Ara Wai complex as this engine has been a part of our history in Te Awamutu from its original roll pulling logs to its many years being a cherished play attraction down in the War Memorial Park.”

Holt said that she completely understands the frustrations that those involved in the project hold with it having been dragged out for many years.

“The climax engine has been finished for quite some time and I know the Lions have been asking for a site for probably longer than that, so I am not surprised they are very frustrated that no one will make a decision where it can go,” she said.

“They have restored it beautifully and no one can see it.”

Now that Council have purchased the Bunnings building the engine could possibly go parallel with Arawata street in the old garden centre or have its own building on the corner of Landscape Lane and the Bunnings (Te Ara Wai) carpark.

“It is a major mission to move so it needs to be done once and done right, however waiting years to find a suitable place is not acceptable.”