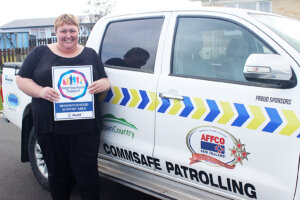 With the help of the community patrol Joanne Bell is helping to keep her neighbourhood safe.

Joanne Bell of Te Awamutu is a true neighbourhood champion, and she has the certificate to prove it.

Joanne was recently named Waikato champion of the year at the Neighbourhood Support Awards.

“I feel very humbled being not only nominated but to come away winning was very much a surprise,” she said.

Joanne started a neighbourhood support group for her neighbourhood after she noticed a few incidents on her street and decided it was time they all got together and met each other.

“Initially it was a lot of work but it’s well worth it knowing everyone was looking out for one another,” she said.

Commsafe’s Mandy Merson and community constable Ryan Fleming helped with the establishment of the new group.

Mandy, who nominated Joanne for the award, said that over the last year Joanne had been proactive in connecting directly with her neighbours and making herself known.

She also set up a Facebook community page with 65 members from her neighbourhood to help grow a wider network.

The group had been able to provide police with evidence of some of the crime plaguing the neighbourhood.

“I believe Joanne is a true champion and her actions create a safer and more connected community,” said Mandy.

Joanne while the award was a great honour, being able to connect with her neighbours was the bigger prize.