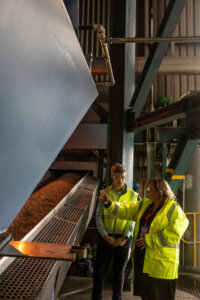 The site has been operating on wood pellets for nearly a year and the official opening was delayed because of Covid-19.

The carbon-neutral wood pellets come from Taupō, where geo-thermal energy is used to press and dry untreated waste wood shavings, sawdust and off-cuts from sawmills there.

Carney says the plant has an excellent relationship with Nature’s Flame, which supplies the pellets. “There’s been no supply issues and the pellets do the job very nicely.”

“What we’re learning about the pellets we’re sharing so to help our other sites that are making the switch from coal to wood,” he says.

The move away from coal at Te Awamutu is part of Fonterra’s plans to reduce its emissions by 30% across all its manufacturing operations by 2030, on the way to net zero by 2050.

“We’re committed to optimising our energy mix towards cleaner, more efficient forms of energy. It’s about exploring alternative renewable energy sources like wood biomass and electricity, as well as improving the efficiency of our energy use,” says Linda Mulvihill, Fonterra’s Head of Energy and Climate.

The Te Awamutu plant’s switch to wood pellets has already reduced the Co-operative’s national coal consumption by almost 10 per cent, saving more than 84,000 tonnes of carbon emissions per year – the same as taking 32,000 cars off the road.

As Minister Woods opened the new boiler at the Te Awamutu plant, the Co-op announced details for its next site to exit coal – Stirling cheese plant in Otago.

Otago’s ‘fantastic little cheese plant’, will be coal free and using wood biomass to fire the site by August next year.

This will make Stirling Fonterra’s first 100% renewable thermal energy site, a significant step towards the Co-op’s goal of getting out of coal all together by 2037.

By switching to wood biomass, the site’s annual emissions will reduce by 18,500 tonnes of CO2 – the equivalent of taking more than 7,000 cars off the road.