When it comes to rail, councillors are . . . On different tracks Hamilton City councillor Dave Macpherson, who played a vital role in lobbying for the establishment of Te Huia – the Waikato to Auckland rail commuter service – says “you’d have to be blind Freddy” not to see the potential of rail.

Meanwhile Waipā district councillor Grahame Webber, despite being credited by Macpherson with ensuring land along Victoria Street between Hautapu and Cambridge remains a rail corridor, says it would be a “waste of money” to fast track a Waikato rail commuter service.

Macpherson argues Waikato already has the rail infrastructure thanks to the dairy industry. Rail played a crucial part in the 19th and 20th centuries around the region to transport milk from dairy factories to markets. Re-establishing those rail networks was one of the 23 shovel-ready projects put forward by the Waikato Rail governance group and championed by the region last year.

The infrastructure projects should help reduce the economic impact of Covid-19, the Government said. The metro rail network, which would link Hamilton with other Waikato towns including Cambridge, Te Awamutu, Morrinsville and Ngaruawahia, did not proceed as part of the shovel-ready projects.

Webber echoed the views of planning consultant Mark Chrisp who said in 2018 a park and ride operation at Hautapu was a better option than extending rail into Cambridge CBD. Any rail connection from Hautapu to the CBD would involve constructing 10 level crossings. 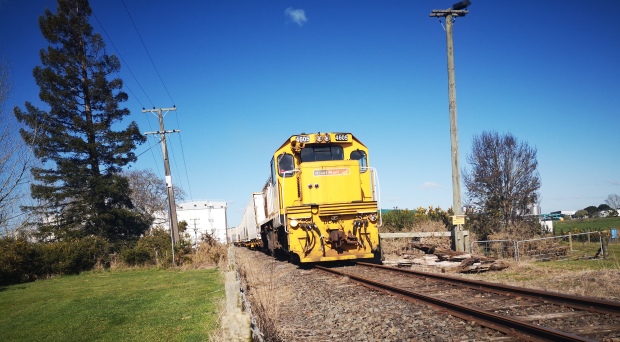 Fonterra uses the Hautapu Branch Line from Ruakura about once a week, said Webber.

KiwiRail retains the land for a possible future passenger service between Cambridge and Hamilton.

“It would just be too expensive to reinstate the line into Cambridge,” said Webber.

In addition to laying new tracks there and building crossings, the railway bridge at Bruntwood would have to be strengthened as trains are only able to travel 15km/hr over it.

“Look at Te Huia, it’s cost $100 million and it’s a complete shambles. It’s a waste of money and we don’t have the infrastructure to do any more.” Macpherson said Hamilton and the wider Waikato had the highest dependency on private motor vehicles in New Zealand.

Commuter traffic between Hamilton and Waipā towns Cambridge and Te Awamutu had become grid-locked with the only public transport option being a regional bus service.

Strengthening the rail network between Hamilton and Auckland airports was critical, he said.

Doing up the railway station in Te Awamutu would also be needed, he said.

The Waikato Regional Public Transport Plan identifies that transitioning to a rapid transit-oriented network supported by excellent metro connections over time will provide capacity for further population growth and development.

Macpherson said this would create more liveable urban areas and a healthier environment by moving significantly more people while using much less space than a car orientated system.

“Continually adding capacity to roads to accommodate more cars is neither practical nor affordable in the long term,” he said.