Carla’s back in black 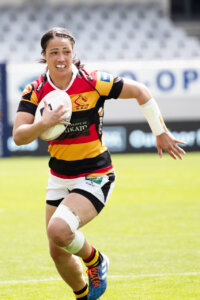 After a return from injury and the sacrifice of leaving her family, Kihikihi’s Carla Hohepa is putting it all on the line to get back into the black jersey.

The 36-year-old has been named in the 34 player Black Ferns squad for the tour of England and France, 14 years after her debut in 2007.

Speaking to the News, Carla said it was cool to get back into the squad as there is always a buzz to get the call up no matter how many years you have been around.

But she said that this one is particularly special as she wasn’t sure she had done enough as she hadn’t had a lot of game time or opportunities this year.

“It has been a journey to get here,” she said. “I had surgery at the beginning of the year in Japan which kept getting put off because of Covid, so to make it back in the jersey after finally getting a spot in MIQ to return back to NZ is pretty amazing.”

Carla splits her time between Fukuoka, Japan, and Te Awamutu every year with her two sons and husband, Karne Hesketh, who plays professional rugby for Japan and the Fukuoka Sanix Blues. Carla was also named New Zealand’s women’s player of the year and IRB women’s personality of the year in 2010, after scoring the only try in a 13-10 World Cup final win over England 13-10 at Twickenham.

But to make the World Cup in New Zealand next year she will spend 10 weeks away from her sons and husband as they head back to Japan.

“It’s a pretty big sacrifice that will have some mental challenges as a parent to be away from them for so long… but a sacrifice I have decided to tackle in order to have the opportunity to represent my country again,” she said. “You don’t get many opportunities in life like these.”

The Black Ferns October-November tour will see two matches against England and one against France.