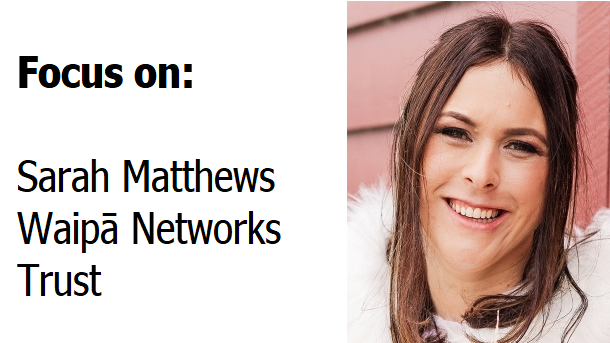 Today we introduce a new feature where we talk to people in the news and people who make the news. Focus on will be a regular addition to the News. Who do you think we should focus on? Tell us at editor@goodlocal.nz

I was born in Huntly but moved to Ōhaupō when I was a baby and lived there until I moved out of home.

I went to Waikato University for a year and then started work at a Te Awamutu accountancy firm where I did the rest of my degree via correspondence with the Open Polytechnic.

I now live in Te Awamutu, where I have lived for most of my adult life.

What role/s do you fill:  In my day role I am executive manager Finance & Strategy at Ruapehu District Council.

I also worked part time for Waipā Networks Trust as secretary/treasurer up until my newly elected trustee position.

Tell us a bit about your family:  My husband Justin and I have a blended family with five children: Emily, Codee, Boyd, Liam, and Maddie.  They range in ages from 8-15.  Never a dull moment!

Do you have pets:  Yes one dog, a schnoodle called Luna and two cats called Charlie and Zoey.

Favourite movie:  Me before You.  I read the whole series and I love Jojo Moyes’ work.

Name one of your top 10 favourite New Zealanders:  I have to say my Dad, he raised us as a solo father and was absolutely the best father anyone could ask for. He would never say a bad word about anyone, he always put us first and he role modelled working hard.  If you wanted famous though, I would always say Kate Sheppard because of what she did for the women’s suffrage movement.

Favourite bird:  I actually have a little fear of birds as there was a magpie who used to chase me as a child and I never got over it. If I had to choose though, I would say weka as we had this cool little weka trying to steal our lunch when we hiked Abel Tasman, I liked him because he was cheeky.

Best moment ever: I have been very fortunate in my life that I have so many but the birth of my children and meeting my husband were the moments that changed my life the most.

Best sporting moment ever: Stephen Donald kicking the winning goal in the 2011 Rugby World Cup.  That always stands out to me because he wasn’t originally chosen to play but he turned up and showed everyone his value.

Best place visited: I really love all of New Zealand but Glenorchy is pretty special to us, as it is where we got engaged and then married.

Favourite holiday spot: Ahipara, Northland. It is where my husband is from and where his whānau live.  I feel at peace there by the beach, I love hanging out with the whānau and the fishing up there is pretty epic. We always get plenty of seafood while we are there.

Favourite food: My husband makes a pretty epic pulled pork in his smoker.

What’s your signature dish: I asked my husband, he said my seafood chowder.