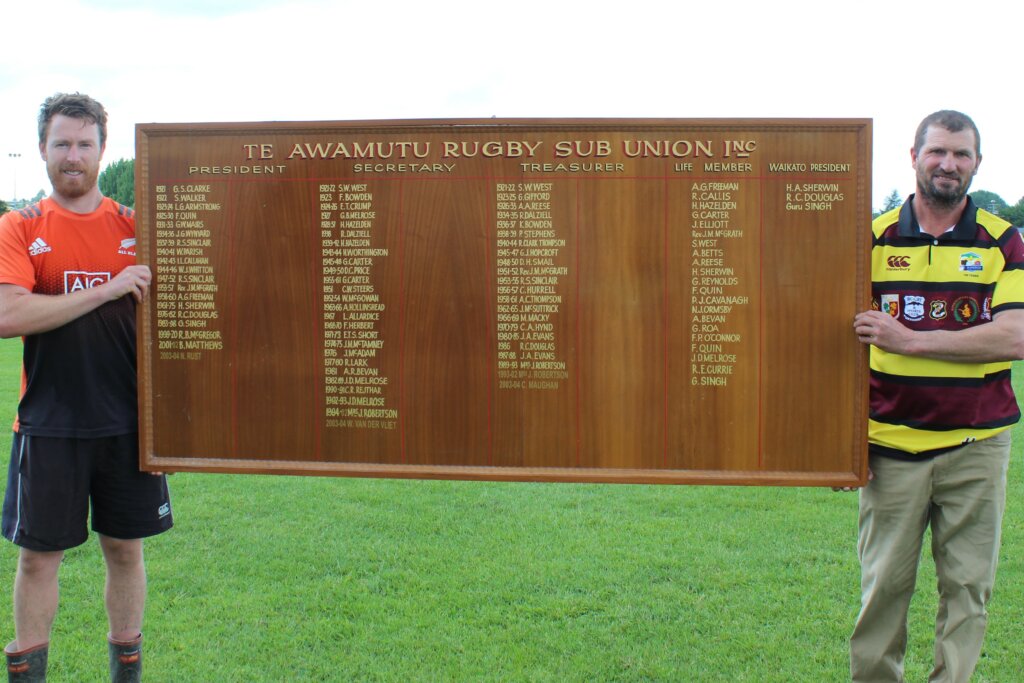 With appropriate social distancing, Ollie Ward (left) and Andrew Young show off the honours board.

When Community Sports Director Ollie Ward opened the Te Awamutu News, he went straight to page five – and saw the headline: A rugby mystery: who can solve it?

He had the answer immediately – he could.

Ollie is in his second stint working at the Te Awamutu Events centre, and as soon as he saw the story about a missing honours board, he had the answer.

A clean out at the stadium seven years ago left Te Awamutu Rugby Sub Union chairman Andrew Young with a problem – lots of memorabilia, including the honours board with information dating back to 1921 – was misplaced.

Two calls for help were made in the News, and it was the second one that caught Ollie’s eye

“I was doing a clean out of a shed on the grounds – there were old grandstand seats, an old scrum machine and old lights,” he said.

“And there was also an honours board and old photographs.”

When he caught up with an edition of the Te Awamutu News later, it opened to the page with the story on it.”

He called Young with the good news – the mystery was solved, and a few news ones created.

A collections of old silver trophies in the events centre includes many from different sports going back a century, each with their own story to tell, if they can be recognised.

In the meantime, Young has a year to plan for the sub union’s delayed centenary celebrations with one less thing to worry about… if you don’t count the question of where the honours board should go, and how the last 17 years of names of sub union officials can be updated.