In the Repair Shop today… Before and after, the pedal horse with proud owner Hazel Barnes.

Some unusual items arrive at the Te Awamutu Menzshed for repair.

Few would be more interesting – or more a challenge – than an Antique Auguste Reidemeister French Tricycle horse, made in France in the late 1800s.

The horse was carved from wood and had glass eyes and a leather saddle supporting iron stirrups. The pedal horse was completed with an iron frame, handles and wheels,

As an avid watcher of The Repair Shop on TV One, Hazel Barnes wondered where she could get it restored.

The horse had been in her family since her Welsh father bought it at a toy “nick knack” sale when they were children.

Hazel said that her father was always coming home with all sorts of unusual things.

If he hadn’t been a farmer, she thinks he would have acquired many more bits and pieces.

She has many happy memories of the toy being part of her childhood, as it was for her children and grandchildren and wants to bring it back to its former glory.

She approached the Te Awamutu Menzshed to see if they could help.

When the horse arrived at Te Awamutu’s “repair shop”, the ironwork, leather and body were all in a very sad state. 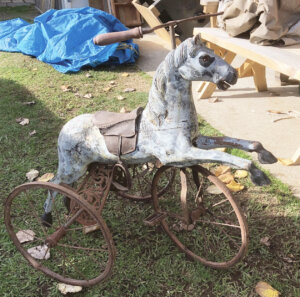 The restoration to the wooden body was carried out by a founding shed member, Eddie Webster, who is well known for his wood art.

Bill Were, one of the restorers, said there were some real challenges in completing the work.

One of these was the tail.

Where would they get a horse’s tail from? The answer was synthetic hay-baling twine in the Menzshed gardeners’ shed. It was plaited into a tail, with a piece of copper wire in the middle to hold its shape.

Waipā District Councillor Hazel Barnes was delighted with the restoration.

Menzshed Chairman Steve Mannington said they often get requests to restore items, but never one as old as this.

The team is constantly making furniture for kindergartens and play centres and also boosts funds by building pest traps for community organisations and the district council.