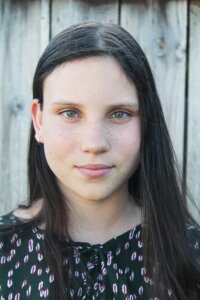 Billie Brown-Wahanui and Oksana Voznyuk, video called their families to celebrate their achievements after being recognised in the Waipā Youth Awards.

Both had stepped into various leadership roles during their time at Te Awamutu College.

This awards attracted 97 nominations and 52 awards were presented.

The awards were open to students aged 14-18 who live, or have attended school in Waipā.

Wahanui chaired her school’s service committee in 2020 and won the Waipā District Council Service to The Community Award at the end of that year. She also coached and umpired netball for the Te Awamutu Netball Centre while at college.

She is studying a Bachelor of Communication at Waikato University, majoring in marketing and digital business. Her studies are being funded by the $25,000 Te Paewai o te Rangi Scholarship (The University of Waikato Scholarship for Outstanding Academic Achievement), which Wahanui won last year.

She plans to taking on a Residential Assistant role at the University next year.

“I’m pretty proud of myself. I put in a lot of hard work, and it feels good to be recognised for it.” Wahanui said.

Upon winning the Waipā Youth Multi-Achiever Award, Wahanui’s family Facetimed her to celebrate.

“I’m pretty happy, my mum was really happy for me.”

She see herself taking on managerial roles in either marketing or digital business in the future.

Voznyuk became involved with SADD (students against dangerous driving) in her first year of college. For her final two years, she was a national SADD leader. It gave her the opportunity to help at police fatigue stops and she also spoke to the Waipā District Council and voiced concerns held by SADD members.

During her final two years at college, Voznyuk was also a Keep cool Mentor. This involved working with and guiding year nine students.

She was named Dux of Te Awamutu College last year and topped Earth and Space Science, English Extension and Drama.

Voznyuk is studying a Bachelor of Advanced Science with psychology at the University of Auckland. She received $20,000 to go towards her studies, after being awarded their Top Achiever Scholarship last year.

Like Wahanui, Voznyuk’s family celebrated her award by having a video call, although they used Zoom instead.

“They were all excited, they all joined a Zoom call to tell each other the news.” .

“It has been so cool to have this experience, even though it was online this year.”

She wants to pursue a career in clinical psychology.

The pair finished their studies at Te Awamutu College last year and were both nominated for their awards by their former Principal, Tony Membery.