Long-standing Te Awamutu Community Board member Gary Derbyshire has stood down to concentrate on his business interests.

Derbyshire, 65, said his real estate business was experiencing unprecedented growth and he recently expanded the commercial side of it to include his son Mark.

They needed to concentrate on that, he said.

“There’s a lot of things coming the community board’s way – Three Waters and new building codes and it needs someone who has got the time to put into that.”

Derbyshire said he could see the workload ramping up particularly once Waipā District Council decided to retain community boards as part of a recent representation review.

“The board should be supporting the council every inch of the way,” he said.

“What I feel the role of the boards is to look at what’s going on in the community and act as an advocate and a conduit.”

Derbyshire, who was previously community board chair, has been on the board off and on for 13 years.

Current chair Ange Holt said he had been a real asset to the Te Awamutu community.

“He is continually keeping his ear to the ground while out and about and has lots of conversations to get those grassroot opinions and he brings those voices to the board on a regular basis.

“His leadership, ability to get on well with the community, board and staff alike and knowledge of the issue at hand has been second to none,” said Holt.

Derbyshire said he would have resigned earlier but wanted to avoid having a costly by-election.

“I didn’t want to put the council into any additional cost.”

The board is now able to co-opt someone onto the board, something which happened in Derbyshire’s case.

“Hazel Barnes tapped me on the shoulder to go on the board and that’s what we should be looking to do now.”

Getting someone younger on the board and with a passion for the community would be uppermost in other board members’ minds, he said.

Or the board could decide to leave the position vacant until the local body elections later next year. 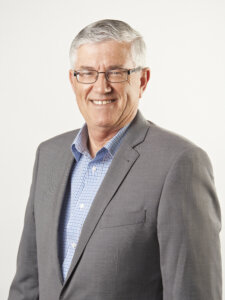 Derbyshire, one of eight children, moved from Taranaki to Te Awamutu in 1965. He and wife Christine married in 1968 and have two sons and four grandchildren.

He has been in the real estate industry since 1993.

“Te Awamutu has got so much going for it.

“We are largely insulated from some of the major drops other major regions see.

“I know we’ve been hammered in the hospitality sector but that will bounce back,” he said.

Te Awamutu had strong commercial and retail businesses available to service farming clients and Waikeria Prison plus Aucklanders and people from neighbouring Hamilton and Cambridge were buying property in the town, he said.

“He will be sadly missed from our team and leaves a big pair of boots to fill,” said Holt.