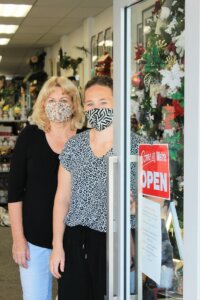 Bev Cooper and  Brodie Hewlett are enjoying the chance to welcome customers back. Photo: Luke East

After weeks of click and collect, Waipā retailers were permitted to open their doors again yesterday.

Bev Cooper, of Murray Hunt Furnishings, was relieved and glad that the company’s three stories were permitted to open after having operated  click and collect for flooring and fabric samples.

She said many local businesses will need the pre-Christmas rush to survive.

Debra Morrissey, manager of Te Awamutu’s Red Cross Shop, is relieved to be able to open the doors again and says the shop was restocked during Level 3.

At Te Awamutu Paperplus Murray Green says that the last four weeks have been tough.

Paperplus has also been open for click and collect but he says that for many of his older customers who don’t do online banking, the only place they can pay many of their bills is Paperplus.

It had been frustrating not to be able to provide that service over the past month.

Despite being closed for almost four weeks, the shop had attracted only 14 days of the wage subsidy.

For hospitality businesses it was a lifeline, the Cambridge Chamber of Commerce wrote on its Facebook page.

Meanwhile, the Te Awamutu Chamber of Commerce holds its annual meeting tonight at 5.30pm – by Zoom.

The meeting had earlier been postponed from September to October.

The Te Awamutu News is running a competition to win vouchers worth up to $4000 for those who shop at participating local businesses. Look out for adverts listing participating businesses. The draw has been put back to December 17.