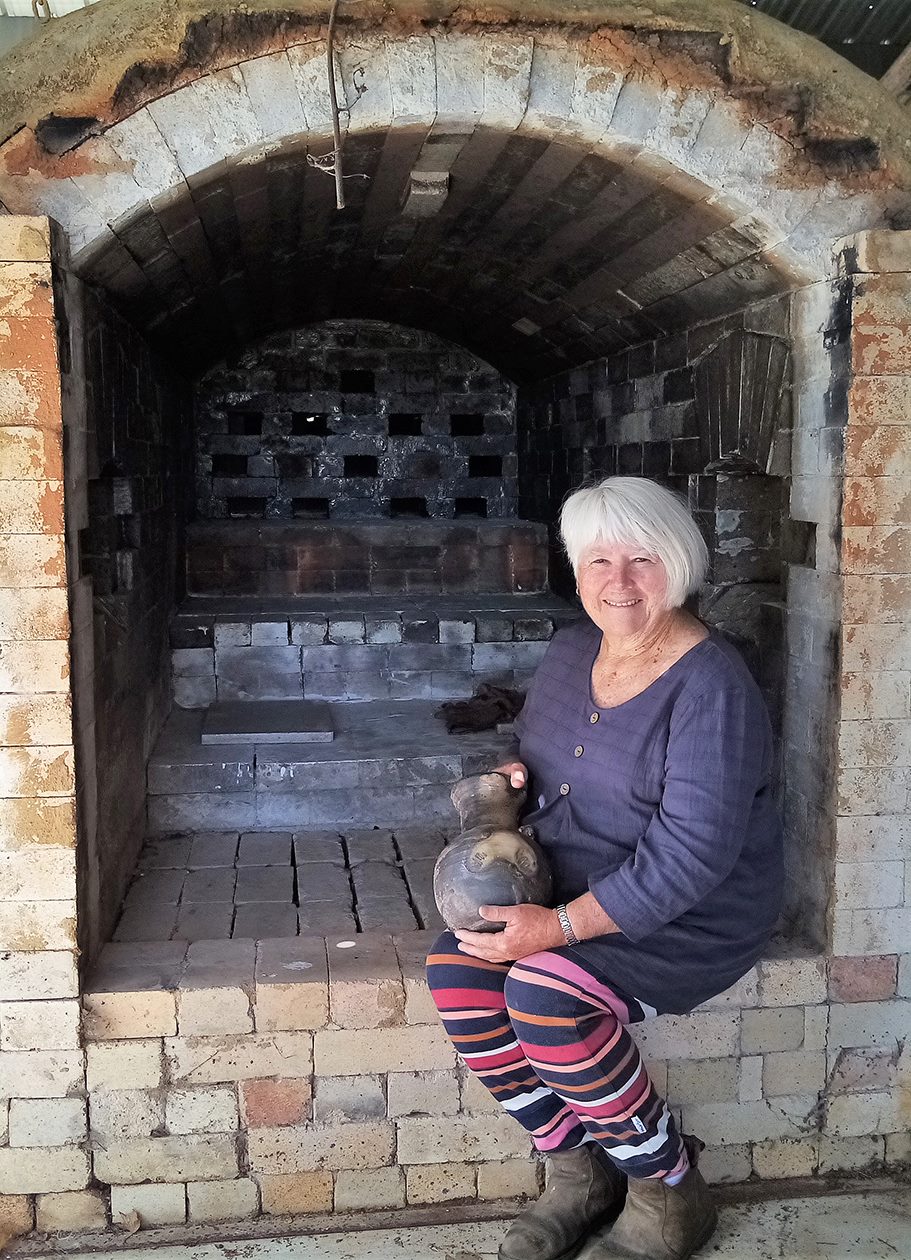 Janet Smith at the entrance to her almost four-metre long anagama kiln.

Friendships forged in the heat of a wood-fired anagama kiln in the back-blocks of Roto-o-Rangi are central to an exhibition at Te Awamutu Museum until December 23.

‘Forged in Fire’ tells the story of how the kiln came to be built on potter Janet Smith’s rural property in 2019. Overlaid with that is the tale of friendships formed during workshops where potters camping out on Janet’s land oversee 24/7 ‘stoking shifts’ over several days to ensure the firing processes go to plan. It’s a technical minefield with masterful results.

Janet, who is president of Waiclay, has been involved with the exhibitions they have held jointly with Waikato Museum for more than 20 years. That amounts to about half the time she has been a working potter with a four-decade interest in building kilns; she built her first in Taranaki’s Midhurst over 30 years ago and has been buying or building them ever since.

The decision to have a Japanese-style anagama kiln was a natural progression, she said. There are just a few across New Zealand. “I always wanted an anagama. They’re totally wood-fired, which means the distribution of wood ash over the pots creates some really interesting finishes.”

The ancient type of kiln was brought to Japan from China via Korea in the fifth century. The word ‘anagama’ means ‘cave kiln’ in Japanese. It comprises a firing chamber with a firebox at one end and a flue at the other, with temperatures soaring to around 1300 degrees Celsius over 72 hours. The complex interaction between flame, ash and the minerals in the clay form a range of unusual glaze finishes.

Janet called on master kiln builder and designer Duncan Shearer to build the kiln, adapted to her criteria. They sourced thousands of fire bricks – about 3000 assorted bricks with 279 arch bricks – and with the help of many others, built the kiln over more than six months. The arch spans almost the entire length of the kiln, and tension chains hold it together as the kiln swells under the intense heat. The inaugural firing was in October 2019. Several others followed, each one adding to the accumulated knowledge around the process and each one led by a team of different ‘firemasters’ over a period of three days and two nights.

“It’s a very technical process,” said Janet. “People think you just throw in the wood and let it burn, but it’s far more complicated than that.”

Janet would like to fire the kiln at least twice a year, but Covid has stalled the programme. Each firing involves a workshop-type visit to her property by up to 12 other potters who share in the congeniality of the process. They bring their pots for firing, camp out, talk pottery in Janet’s lovely old dance hall and take shifts in manning the kiln. After about a week, the kiln has cooled enough to be opened.

Last time, the team put over 500 pots into the kiln. Janet hopes an easing of Covid restrictions will mean she can organise another firing soon.