Allan Webb is one of five trustees who will look after Te Awamutu’s Regent Theatre.

The printed version of  Te Awamutu News incorrectly reported Allan Webb was a trustee of Allan Webb Theatre Trust. Mr Webb advises us he is not a trustee and we acknowledge that.

A charitable trust has been set up to take over Te Awamutu’s Regent Theatre – and it has been gifted to it by the man who has owned and operated the theatre since 1974.

Allan Webb has struggled to keep his theatre business viable post Covid-19, running it on loans. Nearly $20,000 raised earlier this year from a Give-A-Little appeal.

According to papers filed last week by Tompkins Wake lawyer Campbell Stewart, the Allan Webb Theatre Trust will receive “certain assets” including the theatre itself from entities associated with Webb.

The trust is expected to run the theatre from next April.

Webb had made no secret of his desire to have a community trust take over the theatre telling Radio New Zealand in March he would give the theatre to the town. It was the only way the theatre could celebrate its 90th birthday next March 12, he said. 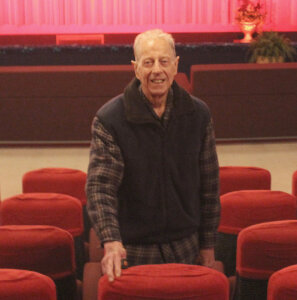 In an email to supporters and to The News last week, Webb said without community support he could never had made the theatre and its associated museum such a popular small-town entertainment venue.

The News sought further comment from Webb, but he declined saying a New Zealand Herald owned newspaper, edited by one of the trustees, was “doing something and I can see no reason to double up on it.”

When Webb took over the theatre 47 years ago it had one screen. It now has five which incorporate the latest developments in cinema, sound and picture technology.

The News understands the Regent Theatre building is owned by Cinema Theatre Complexes Ltd. The company filed its last annual return in 2002 but was restored to the Companies Office on 22 November. Webb owns all 21,000 shares in the company.

The building has a capital valuation of $930,000. The rates are $8000 a year to Waipā District Council and nearly $500 to Waikato Regional Council.

Webb has previously said he had a floating mortgage and loans which kept the theatre running, but it was not clear whether those loans were on the building, his companies – he also is a shareholder of Victory Enterprises – his Te Awamutu house or a combination of all three. It is also not known whether the trust was taking on any of those debts.

Australian marsupials introduced in acts of extraordinary folly are headlined by the brushtail possum. After they were released in 1837 to create a fur trade, their numbers peaked at around 70 million. They have fallen…