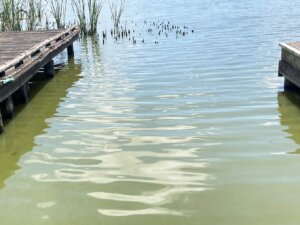 The bloom has starved the lake of oxygen.

The toxic bloom outbreak and drop in oxygen levels in Waipā’s Lake Ngaroto has killed thousands of fish, including tuna (eels).

Access to the lake was closed late last week when the cyanobacteria public health warning, first issued on December 30, was lifted to extreme.

“The closure of the access into Lake Ngaroto is due to the highly significant rise in both cyanobacteria and E.coli levels,” Waikato DHB’s Medical Officer of Health Dr Richard Hoskins said.

“This rise poses a significant risk to all recreational users of the lake,”

Even inhaling the toxin was dangerous, he said.

The toxin producing species in the lake are of species that are extremely toxic to all mammals.

The closure, which includes the walking track around the lake, came as a result of a joint decision involving the DHB, Waikato Regional Council, Mana Whenua and Waipā District Council.

Shallow lakes with high nutrients encourage high cyanobacteria numbers, especially when temperatures are warm as they have been at the lake this season. Ngaroto, which reaches a length of 1.7km,   has an average depth of two metres.

“But it was a combination of issues that caused oxygen levels to drop, resulting in thousands of fish, including tuna, to die in recent weeks at the lake, Dr Allen said.

“The lake water stratified, with warm water overlaying the deeper cooler water. On top of this, existing cyanobacteria had collapsed and that rotting biomass sucked the oxygen out of the water, which suffocated the fish. Tolerant fish like carp can suffer through a few hours gasping at the surface, but not right through the day when high temperatures increase the amount of oxygen they need to survive.

“Bacteria then feed on the dead fish and infect ducks. While we have recovered some duck carcasses from the lake with Fish and Game, we haven’t yet confirmed they died from botulism, although this is the likely cause,” Dr Allan said.

Waipā District Council Chief Executive Garry Dyet said the Council has stepped up their response to help break the cycle.

In addition to daily collections by Council contractors and key partners, a boat will be used to access hard-to-reach carcasses and sick birds.
Bill Harris of Ngāti Apakura was concerned at the loss of fish and waterfowl particularly the tuna (eel) and kauwau (shag).

“We are looking forward to continuing our partnership with Waipā District Council to begin putting steps in place to ensure these regular seasonal events cease to occur.”

“Ngāti Apakura considered placing a rāhui on Ngā Roto, but support the current response work Council and their wider support agencies are undertaking at this challenging time,” he said