A teen with focus From Twitch live-streaming to professional photographer, 17-year-old DJ Mills is one of Te Awamutu’s youngest entrepreneurs.

DJ started his business, Shutter Media Group, last year. He shoots everything from wildlife to weddings, and has a particular interest in motorsport photography. He has friends who race at the Kihikihi Speedway, who he sponsors, taking their photos in exchange for brand placement on their cars.

He scored a coup the weekend before last when he photographed the 2022 CIK Trophy at Kartsport Hamilton. During so, DJ took photos of Formula Two Drivers Liam Lawson and Marcus Armstrong. Lawson later asked DJ if he could use his photos for his Instagram page.

“I’m a Formula One freak, if I could shoot any kind of photos, it would be Formula One,” DJ said.

Before starting his business, DJ streamed video games on the livestreaming platform Twitch. He made money doing this and eventually saved up enough to buy a small mirrorless camera. 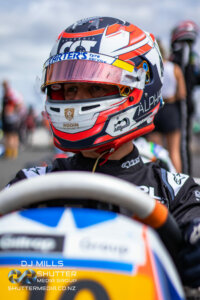 This camera is what started DJ’s photographic journey and since getting it, he has brought two more and various lenses. As well as Twitch, DJ has made money by landscaping part time, and working for the Covid-19 helpline, alongside his mother Sarah last year.

He is studying photography at Te Awamutu College, but last year he was told to take a different class because there was nothing more they could teach him at that time. Now DJ is focusing on articulating why he takes certain photos, instead of how.

Formula One photographer, Kym Illman, is one of DJ’s favourite photographers and inspirations. DJ likes that Kym incorporates portraiture into his motorsport photography, something he tries to do in his own work.