Lakes on the brink

Regional and district councillors have been given an insight into the alarming state of Waipā peat lakes and warned that without action, they will get worse.

Regional councillor Andrew MacPherson accepted a challenge from Fish and Game manager David Klee, to bring councillors and staff to Lake Ngaroto on Tuesday to get an understanding of the ecological disaster, which claimed the lives of thousands of fish and birds last month. 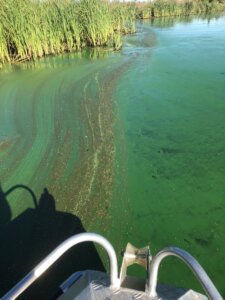 David Klee told the News last week the lake was like an effluent pond, after penning an open letter to staff and councillors.

He says councils have done good work and farmers have made efforts to improve water quality – but they have also been getting or giving the wrong messages about what needs to be done. He said this week repairing the damage at Ngaroto was an intergenerational project – and it underlined why, with 90 per cent of Waikato lakes “going backwards” it was time to draw up plans to protect them now.

Liz Stolwyk, who used walk the 7km edge of the lake, told the group “you have to bring the community along on this journey.”

She said to Klee “I hear your challenge, it’s a good challenge.” Klee told the News the Healthy Rivers/Wai Ora project, described by the regional council as the bold first step in an 80-year journey to achieve rivers that have improved water quality and are safe for food gathering along their entire length did nothing for the lakes.

Cyanobacterial blooms, fed by nitrogen run off, turned Ngaroto into a lake of death for wildlife, and Klee said but for heavy rain over recent days, the cycle was set to be repeated last weekend.

He believes the Emission Trading Scheme should encompass retiring agricultural land around lakes so they can revert to their natural state and assist in filtering run off. That would provide farmers with an incentive to help restore them.

He told this week’s meeting that repairing Lake Ngaroto should at this stage be aimed at stopping the fact it was haemorrhaging.

“This is what will happen to other lakes unless we take action now.”

The issue has highlighted the need to review the line between commercial and ecological needs.

MacPherson told the News following the meeting he was mindful of the role agriculture has played in the country’s economy during the Covid pandemic.

“We relied on farmers to keep going – we can’t afford to lock up all peat catchment areas,” he said.

But he supported Mylchreest’s comments. The mayor proposed trying experimental methods to fix the lake.

“How much damage can we do by trying something different?” the mayor asked.

“At the end of the day, if we carry on managing the catchment the way that we are, then this will be the result,” Klee said.

“Let’s be honest about that, and then we can have a discussion about what we can do and how we are going to pay for it.” The lack of oxygen in the lake has led to thousands of deaths. Photo: Benjamin Wilson.