Hooker Road landowners Neil and Linda Porritt on the Te Awa River Ride behind their farm. When the new section of Te Awa River Ride between the Velodrome and Tamahere opens, Neil and Linda Porritt will be watching out for you.

The Hooker Road landowners gave up part of their property for the river ride and while they have enjoyed construction workers’ company for the last two years, it is cyclists and walkers they want to see use the shared path.

The 72ha farm, formerly a quarry and now planted in maize and apples and used to fatten stock, is on the banks of the Waikato River and has been in the Porritt family for more than a century.

Neil, who can see people on the concrete ride from his living room window, paid tribute to the contractors. “Everyone went out of their way to be helpful.”

The Porritts were one of four landowners who were guests of honour at the Te Awa VIP sneak preview last week. The others were Tim and Karen Bodle, Andy and Sandi McGrath and St Peter’s School.

Te Awa River Ride Charitable Trust chair Simon Perry said the Velodrome to Tamahere section of the cycleway was “13 years in the making.” Landowners Tim and Karen Bodle on the Te Awa River Ride behind their farm.

The Waipā section was to have opened soon after the ceremony but following storm damage earlier in the month, it will now open next Tuesday.

Construction of the latest section was no easy feat – it comprises 3km of 3m-wide concrete path, 1.4km of boardwalks, two bridges, drainage, culverts, landscaping and fencing.

Waikato deputy mayor Aksel Bech, who represents the Tamahere ward, said the ride was a real asset. The ride goes around the back of St Stephen’s Church and under SH21 Airport Rd.

“My heart is connected to this much more than my legs are,” he said. 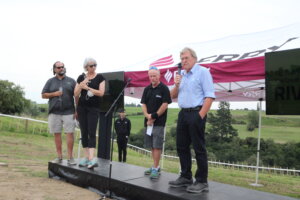 Hamilton mayor Paula Southgate said the project was a real example of good cross boundary work between the three councils while Waipā mayor Jim Mylchreest said getting an infrastructure in place would get people coming to the region.

The 70km river ride from Hamilton to Horahora forms part of the Perry Group’s vision for active communities and enhancing use of the Waikato River.

The first section began in 2009 when then Prime Minister John Key turned the first sod at the Karāpiro section. The Ngāruawāhia to Horotiu section finished in 2015 and two years later the Perry Bridge cycleway across the Waikato River.

Construction on the leg between the Velodrome and Hamilton began in 2019 when Associate Transport minister Julie Anne Genter turned the first sod.

Covid-19 delayed the project several times – the section was to have finished mid last year. Each council was responsible for construction of its part of the track with $2.95 million coming from Waka Kotahi and $2.84 million from the Government’s shovel ready infrastructure fund.

The Waipā section was to have opened soon after the ceremony but following storm damage earlier in the month, it will now open next Tuesday.