Tim and Karen Bodle on the memorial seat they donated to honour the Whakanui Stud founders.

When Tim and Karen Bodle agreed to have part of their Whakanui Stud used for the Te Awa River Ride, they wanted an opportunity to acknowledge two very special people.

So about midway through the new Velodrome to Hooker Road section of the ride, down a gravel pathway, in front of a waterfall and looking out to the Waikato River, is a memorial seat.

On the seat is a plaque honouring Fred and Peg Bodle who founded Whakanui Stud in 1968.

The Bodles have done what so many other Waipā residents and organisations do.

Commemorative memorials create a legacy of past family members, friends or community members while also enhancing parks and reserves. Service clubs like Lions and Rotary regularly donate seats through the council’s initiative. One of the more recent donations has been by the Cambridge Christmas Festival Society near the 6m high Le Quesnoy memorial sculpture.

Messages on the plaques are limited to 150 characters on a 150mm by 100mm bronze plaque.

Locations are agreed to in conjunction with council staff. A regular seat costs about $2500 including installation.

For example, Jack and Lilly Yeates have a seat on the Te Koo Utu walkway which acknowledges Cambridge “the town that gave us a new life 1954-2006.”

Out at Karāpiro, there is a seat acknowledging long-time book retailer Richard Wright which says: “Looking over Cambridge’s future – Panic Slowly.” 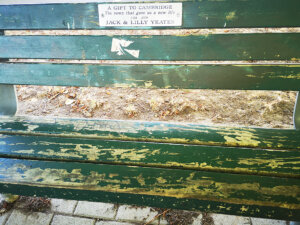 Jack and Lilly Yeates have a seat on the Te Koo Utu walkway which acknowledges Cambridge “the town that gave us a new life 1954-2006.”

Other seats around Cambridge include one remembering John Maynard Hammonds which asks people to “Take a seat, enjoy the view”, or Murray Walter Maxwell saying, “Rest here and Remember” and Gina Anderson “Long, long live love wahine-toa”. There are older ones for J.B. Shannon, James Hooker Esq, George Booth, Barbara Poulter and Rose and Bill Mason.

Ashley Roberts, Te Awamutu’s town clerk from 1951 to 1973 has a comfortable green seat in Memorial Park while Lions Club charter member Norm Martin is remembered for his 50 years of service to the Te Awamutu community. Phyllis Wilson, who died in 2006, has a memorial seat in the park as do Bert and Ethel Spence, Mary Josephine Charleton and Ronald Thomson.

The Hoskin family have a triple memorial to Jack, Joan and Diane, George Clarke, who died in 1969, has a well-worn brown seat, there’s a fading one to Angela Billing and Lois and Peter Self, who were long-standing members of the Te Awamutu Rose Society, have a seat dedicated to them in amongst the roses they loved.

Those contemplating donating or bequeathing a memorial seat can do so on the council’s website.