Bringing the news from Ukraine

It’s 7.50am in Ukraine and Lisette Reymer’s eyes are blood-shot; her body language oozes fatigue.

They are in Odesa, a port city on the Black Sea in southern Ukraine, and just finished a live cross with Newshub Live’s Mike McRoberts and Samantha Hayes before they join The News via Zoom. Lisette, 27, the youngest of Cambridge dairy farmers Garry and Marie-Jose Reymer’s five children tries to relax while sitting in the hotel room where hours earlier she made pasta in a kettle.

Grabbing sleep and food have been problematic for the pair as they chase the stories or run to safety in underground bomb shelters.

As we start the interview, the fire siren goes off in Cambridge.

“That’s a little bit triggering,” she says, a reference to the air raid sirens which go off regularly in Odesa because the city is on the Russian missile path to Kyiv from Crimea.

Little wonder viewers back home are anxious about her.

“People don’t need to worry about me, it’s very nice they do worry, and I know why they do. We’re as safe as we can be in Ukraine and we’ve had a lot of support around us to see we stay that way.”

She reveals they are heading ‘home’ to England later that day.

“I shouldn’t call it home, it’s a pseudo home.”

But even when she gets back, it is unlikely she will get much time to relax.

“News never sleeps, the war is still going on.”

Lisette took over from Lloyd Burr as Newshub’s Europe correspondent last year after she finished covering the Olympic Games in Japan.

When she was eight, and attending St Peter’s Catholic School in Cambridge, she wrote that when she grew up she wanted to be a television journalist. 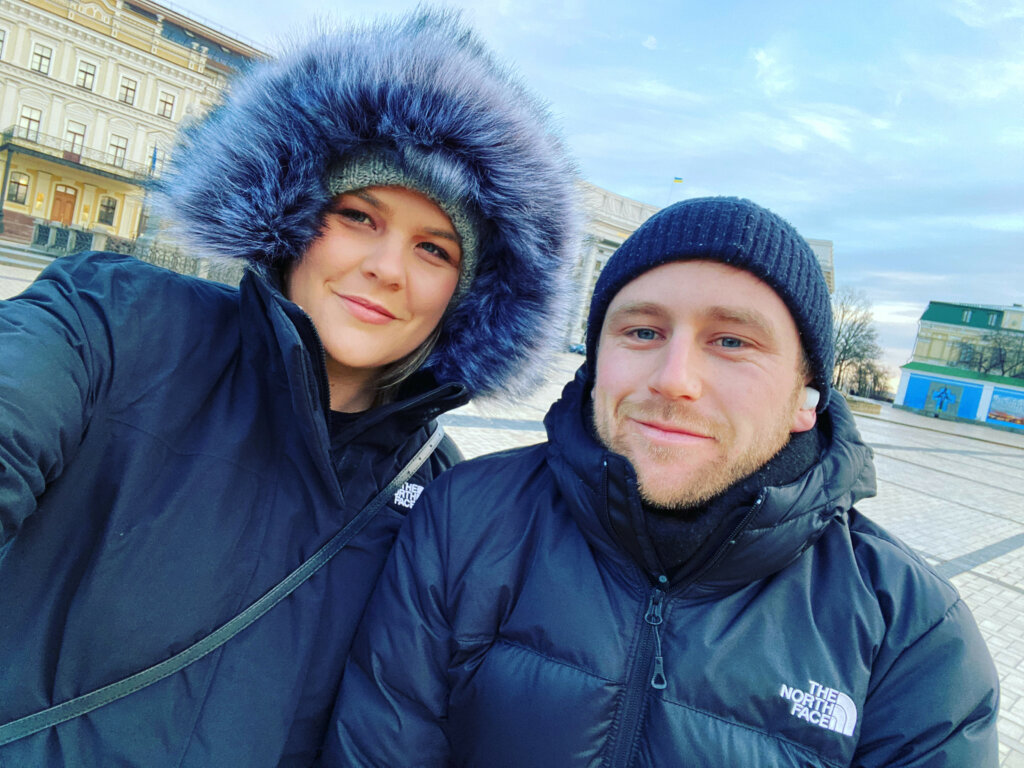 Her brother Bjorn, 10 years older, the eldest of the five and the only boy, was at Broadcasting School in Christchurch.

Bjorn had set up a radio station on the family’s Kaipaki farm; the children would take turns broadcasting on it and Garry, an old boy of Te Awamutu College, would listen to it on his lawnmower or on the farm. He may well have been the only listener, Lisette surmises.

She was a storyteller even then on the radio and making up stories to explain why she was late to netball games or showing off during Mass when she was an altar girl.

“I’d sit there and gas bag with the gal I was on with. I’d do the ding ding (ringing of the altar bell), everyone’s looking at me, life in the spotlight, I’d think I’d nailed it.”

Then outside church her parents would give her a dressing down and tell her off for being a show pony, she says. The school is also where fellow broadcasters Kerre McIvor (nee Woodham) and Bernadine Oliver-Kerby attended some years before her.

Sacred Heart’s vision is to produce inspiring young women to change the world.

Lisette has done that with her storytelling from Ukraine and she credits three teachers for helping her. The first is Gillian Kneebone, who taught at St Peter’s Catholic and retired last year, and the other two were English teachers – Margaret Crawford and Kathleen Wilson “the backbone of the English department” – at Sacred Heart.

“They were so passionate; it was impossible not to fall in love with the subject.

“I wanted to be a journalist, I wanted to go to Broadcasting School.”

Ara Institute of Canterbury only took 20 broadcasting students a year, so the career advisor urged her to look at other options.

“I hate when people tell me I can’t do something. It strengthens my resolve.”

Plus, her brother had done it, so Lisette knew it was possible.

In Year 13, thanks to Mrs Crawford who was always looking for ways students could expand their talents, Lisette won a competition to win a camera and $500 for the school and had an article about her mother published in the NZ Herald.

By then she had also been working as a volunteer in Hamilton community radio using her Catholic upbringing to host a religious show every Sunday.

“I would do these really long-winded spiels about a Bible passage and then I would link it to some modern-day music I wanted to play as opposed to playing religious hymns.”

She graduated from Ara in 2015 and was by then working for TVNZ having spent her internship the previous year on Breakfast TV.

“I hate when everyone messages me and say, ‘you made me cry.’”

“It’s like baptism by fire. The internships are the most eye-opening thing you can do.”

She was in a newsroom working alongside people she had admired for so long.

“I grew up in a family where my dad would not miss the 6pm news and my opa (grandfather) would rush home not wanting to miss the news and I’m like sitting in this newsroom, a 19-year-old that my 50-year-old dad doesn’t want to miss a second of.”

Four years ago, she moved to Newshub on Channel Three conceding it was scary “but the best decision I’ve made.”

“A lot of people swap between the two channels. The industry is pretty small. I could have spent my entire career in one workplace. That doesn’t challenge you, you don’t learn. You get too comfortable. You don’t meet new people.

“Every person that I’ve worked alongside has shaped who I am now. You get to be really greedy and pick all the best bits of these legends you’re working with and that shapes your storytelling.” Fast forward to February 2022 and she is the Europe correspondent when the big story breaks in Ukraine.

The stories have been heart-breaking.

“I hate when everyone messages me and say, ‘you made me cry.’”

“These stories are really important and sometimes you have to hit people where it hurts to make them care about something that is thousands of kilometres away. That’s what we aim to do here.”

Daniel, who has been Newshub’s camera operator in the Europe bureau since January 2019, grew up on a Methven pig farm so they are both Kiwi country kids on the world stage.

Lisette said they are worn out.

“This week we’ve pretty much done a month of 22 hours of work a day. On top of that we’re dealing with some pretty big stuff obviously. We just work all day, then we’re travelling and changing time zones all the time and dealing with this pretty massive issue.

“I don’t think it’s hit us until now. We’re both getting sick. When you’re tired your brain can’t resist thinking about things.

“This week, there’s been a few times where I’ve said to him: ‘Can you just pray to someone, pick a God, any God, but we need someone right now on our side.’” The two manage to laugh a lot and get comfort knowing their stories are making a difference back home.

Daniel says Lisette is one of the most professional journalists he has worked with.

“She is extremely hard working to a point where I have to say, ‘maybe we should have a couple of hours off here.’”

Lisette is grateful she has that “huge” family back home.

“I love Cambridge. It’s one of the best places in the world,” she says.

“I think of them all the time, I’m constantly messaging them and I miss all my nieces and nephews so much.”

But for now, Europe is her news’ patch and she is doing exactly what that eight-year-old Waipā schoolgirl dreamed of doing; being a television reporter and an expert storyteller.