Ticking off the days 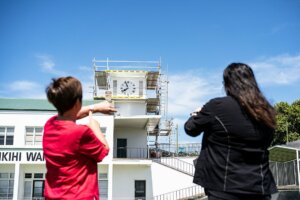 Kihikihi residents are counting down the days until their town clock ticks for the first time in five years.

The restoration work on the Kihikihi War Memorial Clock is expected to be completed by March 31, Waipā District councillor Marcus Gower told The News.

The clocked has been stuck at 1.31 since 2017. Work began on it in December last year, after $70,000 was allocated to fix it in the Kihikihi Urban Development Plan.

The clock tower neighbours the Kihikihi Bowling Club, which is being used as a venue for Kihikihi’s new community hub.

Kihikihi Community Hub co-founder Margaret Kirk said that last year she was a naysayer about repairing the clock but has since changed her thoughts.

“Now I see the excitement around town as we see that maintaining a gift is a way to show respect for our history and to say, ‘thank you’”, she said.

“Around the world clocks are often at the centre of a township. They’re a symbol of longevity and stability. As everything in our lives is dependent upon time, clock towers represent a promising future.”