There is a saying in the Navy ‘a life less ordinary’ and for Royal New Zealand Navy (RNZN) Commander Julie Fitzell, this couldn’t be closer to the truth.

In response to a recent article written by The News, Fitzell reminded us of the many women who are veterans, and of those who are still in service. In the process, she shared some of her experiences from her 31 years in the New Zealand Defence force. Julie Fitzell: “I use my vulnerability as a strength.”

Fitzell was 18 years old and writing classifieds for the Te Awamutu Courier when her desire for adventure led her to join the RNZN on an impulse.

“We were literally on a shopping trip one day and I saw a sign that said Navy recruiting. I went in there, sat some tests, and two months later I was being issued a uniform,” she said.

When Fitzell joined the RNZN only about 12 per cent of sailors were female.

“I was one of those first breeds of women who were deployed on a combat ship. There were initial challenges, but again, it is an evolving organisation, like any organisation.”

Fitzell started her Navy career as a writer, undertaking the role of an administration clerk. However, her military career quickly became much more exciting.

“You can be working in HR one minute, the next, you can be seconded to Melbourne working with the Ministry of Defence,” she said.

In 1996, Fitzell was positioned at McMurdo Station in Antarctica for six weeks as part of a team that managed cargo and ship offloading. Night shifts were a regular part of this deployment, which Fitzell found to be a bit weird, considering Antarctica has 24-hour days.

“But again, I loved it. What a fantastic opportunity.”

In the fallout of the 2009 Samoa tsunami, Fitzell was one of the lead planners getting aid into the affected countries.

She says that men and women are deployed together and experience the same traumas. Tragedy struck in 2005 when Fitzell was stationed in Afghanistan working with the US Army. A freak sandstorm caused a Chinook helicopter that carried 18 military personnel, including her workmates, to crash and left no survivors.

“The worst moment in my career was finding that out, that I lost my team. Having to go through all their personal possessions. And then having to live with the guilt.”

Fitzell’s feelings are compounded by the knowledge that she could have been on that flight, but instead opted out last minute.

“It’s hard, but you learn from that stuff, in terms of how to cope.”

Fitzell says that keeping honest with her feelings and experiences is her power.

“Sometimes you come back, and you might need some assistance to help with your wellbeing and mental health. I share that with others, because there are a lot of others in the organisation who will be going through a similar thing.”

Fitzell acknowledges that the culture of the Navy and society made it difficult for her to be as upfront as she wanted in her earlier years. It took her 10 years before she openly disclosed her sexuality, but now feels comfortable acknowledging her relationship with her wife Kristy.

“I kept that under wraps, because you want to belong and be part of the team, and I wasn’t being my authentic self,” she said.

“I am perfectly imperfect, and I don’t mind that.”

Fitzell says one of the highpoints of her career was when she served as a delegate for prime minister Jacinda Ardern in Tokelau.

“I was her military advisor; I’ve even got photos… I spent six days literally just hanging out with her,” she said. 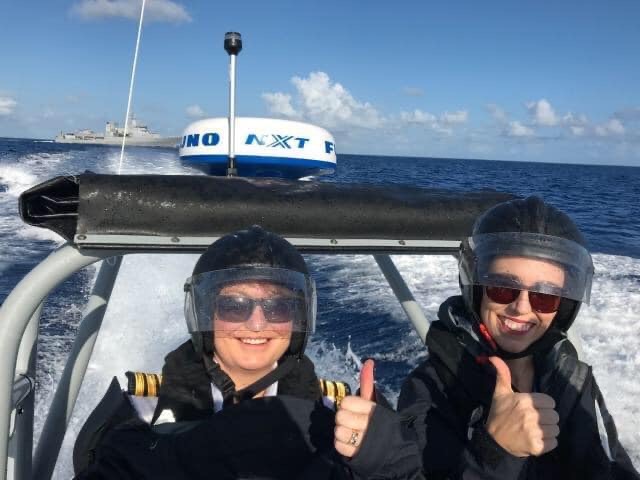 “Honestly, she was just amazing, amazing from a personal level. But to see how she could switch when she needed to was incredible to watch.”

Fitzell’s last role was deputy director of strategic engagements in the Pacific and Southeast Asia. In order to spend more time with her family, she returned to the Waikato last year and is now completing a master’s degree in business management at Waikato University, before she returns to the Navy.

She says her career has given her some fantastic leadership opportunities, including being a part of the Global Women Breakthrough Leaders Programme in 2019.

Fitzell has been a member of the Te Awamutu Returned and Services Association for 20 years. She says although the organisation feels like a second home, she does sometimes need to give subtle reminders of her service, and the service of other women.

“I don’t think the dial is going to have a shift until you have a voice in the room,” she said. “It is all about a sense of belonging, in order to bring out the best of you, and the best that you can be, and lead in a way that you should be leading, everyone needs to feel like they belong.”

Fitzell says despite serving for 31 years, she sometimes struggles to recognise her own experiences in the service but recalls one particular Anzac Day where she was reminded of it.

“There were all these kids, and they did this massive haka, it was just incredible, it was just that show of acknowledgement… It was amazing, it gets me every time.”

For this Anzac Day, Fitzell will be attending Te Awamutu’s civic service.