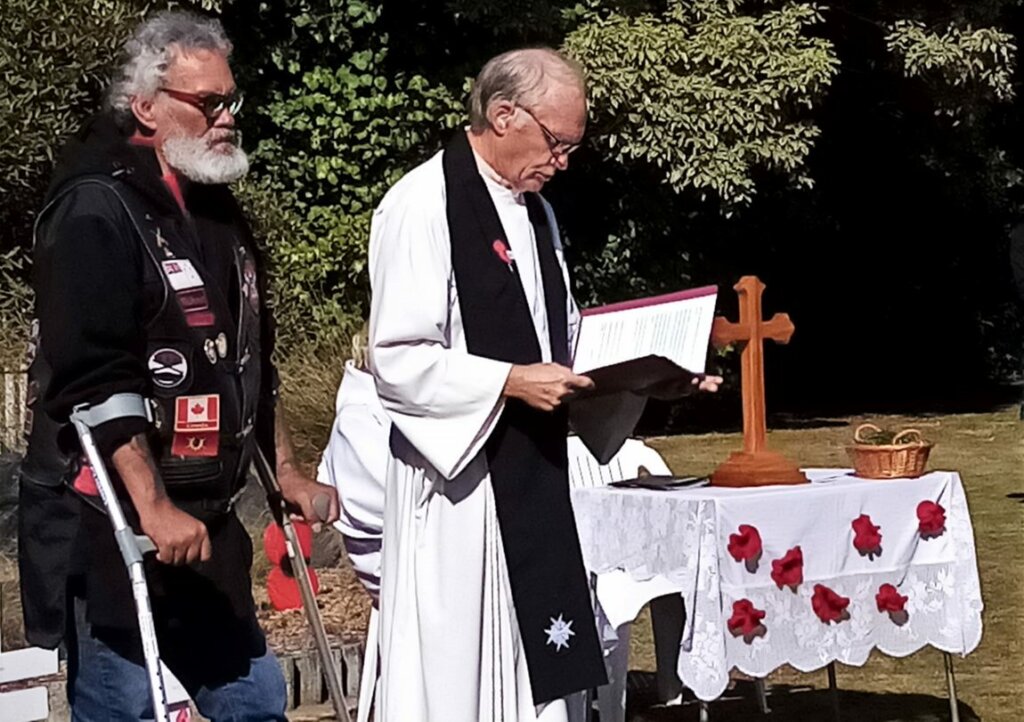 Te Awamutu RSA’s Rev Murray Olson and Paora Stanley, president of the Patriots Motorcycle Club’s Hauraki Chapter, speaking together at the end of the service. On the table is the new wooden cross made by the Te Awamutu Menz Shed.

The village church is one of just two in New Zealand built as a special memorial to service personnel lost in both world wars – the other is at Tutira, north of Napier. Both have historic building covenants over them.

In 2017, members of the Hauraki Chapter of the Patriots Motorcycle Club decided to ‘adopt’ Pukeatua Church because of those strong military ties.

Since then, around 20 of them make the annual pilgrimage to attend the church’s Anzac Day service, most of them riding in from around the district. Te Awamutu RSA’s Lou Brown naming the wreaths at the Pukeatua Church cenotaph. They are from the church community, the local school and playschool, and the Te Awamutu RSA.

Patriots’ Hauraki president Paora Stanley said because the club’s members are all ex-military, they have a real affinity with those linked to Pukeatua Church.

“We choose to pay tribute to these men … the way we see it, these boys ride with us.  We are lucky that we don’t have to do what they did,” he said.

Sunday’s ceremony also saw the formal blessing by Te Awamutu RSA padre, Rev Murray Olson, of the recently completed replacement cross, crafted in recycled rimu by Te Awamutu Menz Shed member Richard Cato.  It replaces the original brass cross which was stolen in January.  The original cross had been donated by the parents of private Horace James Jemmett, who died at Gallipoli in 1915 aged 22.  The acknowledgments were transferred to the new cross. The memorial service was held outdoors this year.

Sunday’s service was held outdoors because of Covid.