I said farewell to a tract of land in Tamahere on Sunday which has played a big part in my life.

The Narrows golf course has witnessed many shots from me which you would be hard-pressed to call vintage golf.

Sunday, the last time golf will be played on the course, was no exception although this time at least, the ambrose format enabled the team to discard my several bad shots. 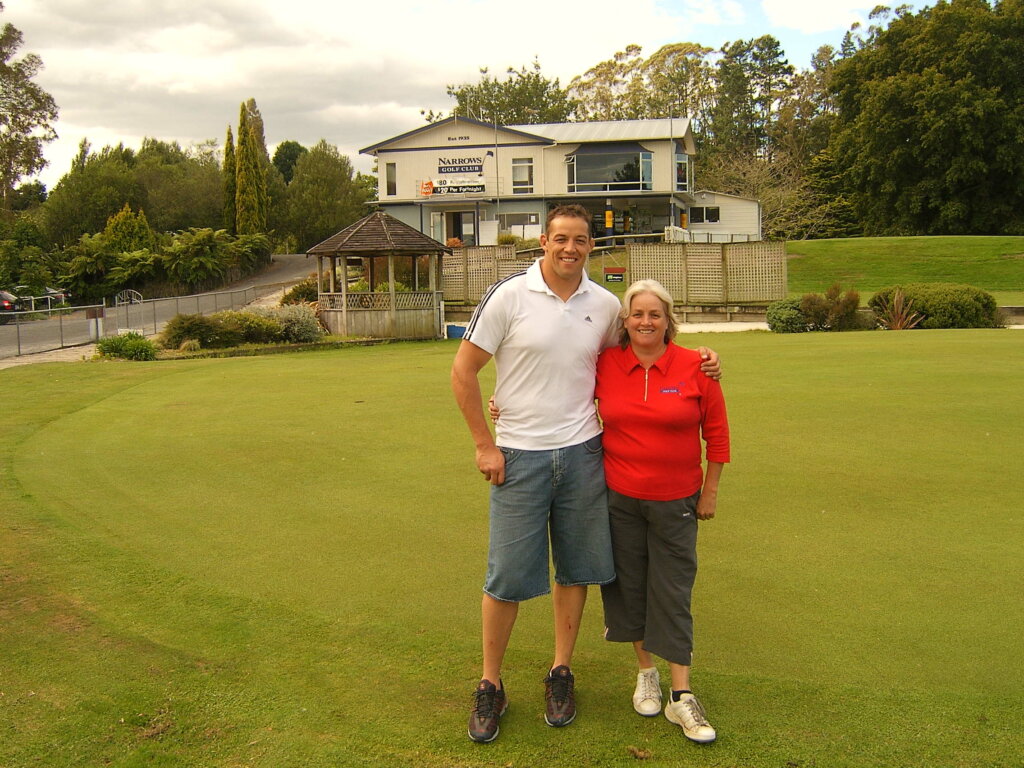 Mary Anne Gill with Te Awamutu rugby legend Jono Gibbes in 2006 at Narrows and behind them the Narrows clubhouse and the two-storey roof Gill’s shots went over!

There was the round when my tee shot on the 18th landed in the right-side bunker and I walked off the green with a 13 and two golf balls lost on the other side of Airport Road, one which ricocheted off the clubhouse roof and another which sailed over the top of it.

It took me some time to rake the bunker too in front of the many eyes in the clubhouse who always took great delight in watching how so-called golfers could badly play a simple par three hole.

Or the time I tried to chip over the lake on the 14th and four shots later, I was putting on the green for an 11 and walked off with a 14.

But there were some good times too. I have never had a hole in one but came close on the 1st and the 6th three years’ apart. 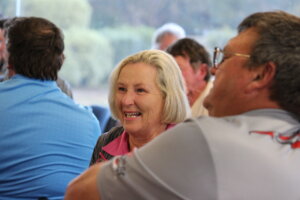 Robyn Moughan enjoys one of those stories in the Narrows clubhouse 19th. 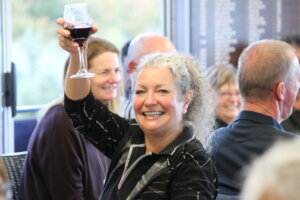 It is over now for the Narrows course which was founded as the Narrows Golf Club in 1935 alongside the Waikato River at its narrowest point. Nine years ago, the club merged with its river neighbour Lochiel to become the Riverside Golf Club.

Not long after the Narrows course was sold to Waka Kotahi the New Zealand Transport Agency for its $600 million Southern Links project. The road for that has a 20-year lapse period and construction is still not confirmed.

After a lengthy settlement, the club accepted $20 million enabling investment to take place on the Lochiel course adjacent to Mystery Creek.

On completion, it was renamed Tīeke, after the member of the native saddleback family which formerly ruled the roost in the area until the 19th century, but are now only found in Waipā on Sanctuary Mountain Maungatautari.

Tīeke reopened in December last year and Waka Kotahi took possession of the Narrows course this month. It will be used for grazing.

If Southern Links does go ahead, the road would go straight through the course and include 18 kilometres of state highway and 13km of urban arterial roads within the Peacocke subdivision.

It will link State Highway 1 from Kahikatea Drive in Hamilton to Tamahere and the Waikato Expressway in the south, and SH3 from Hamilton Airport to central and east Hamilton. A full house in the Narrows 19th for the closing day tournament.

Te Awamutu rider Rebecca Petch swapped bikes and breeds to add another Oceania jersey to her collection after dominating the elite women’s racing in BMX competition at the Sleeman Track at Chandler in Brisbane. After…

Te Awamutu sprinter Leah Belfield has bagged an American title and broken New Zealand records during a stellar period of form. The 21 year old excelled in conference finals last month to quality for the…