Medicine on the maunga 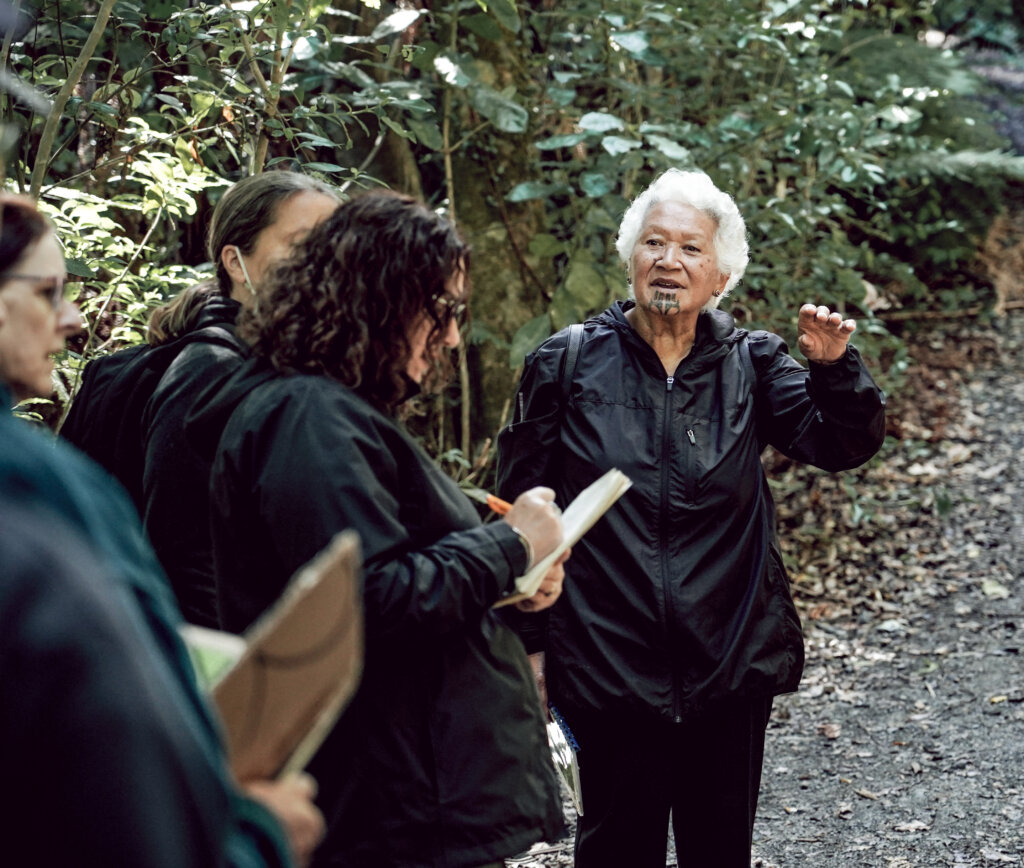 Maungatautari volunteer Ringi Morgan-Fifield with group members who brought notepads to document what she said.

Eager minds are being introduced to rongoā, or Māori herbal medicine, using the flora on Sanctuary Mountain Maungatautari.

Rongoā rākau – an introduction to Māori herbal medicine, is taught by Maungatautari volunteer Ringi Morgan-Fifield. While volunteering on the maunga, Ringi would regularly tell her workmates of the different plants she came across, and their properties.

Her sharing of knowledge was well received by her workmates and sparked the idea of sharing rongoā to a wider audience. This led to the course’s debut in February.

Ringi became “hooked” with the practice after attending an introductory workshop on the medicinal properties of kawakawa, which led her into further studies and the eventual completion of a Diploma in rongoā.

Last Friday was a typical presentation for Ringi. Eleven plants were chosen for a group of eight to learn about as they explored the maunga – kareao (supplejack), mamaku, and koromiko to name a few. The plants were picked specifically for their first aid properties.

“First aid in the bush, or wherever, because nobody gets hurt outside the doctor’s office,” Ringi said.

Ringi began her tour with a karakia, to acknowledge the group’s “pursuit of ancestral traditions.” The different rongoā rākau (plants for first aid) were then introduced to the group members, as they came across them while exploring the mountain’s forest.

Ringi told the group what each plant did, and how to process them – like making tea with Kawakawa leaves to sooth digestion, or using the young tips of kareao as an emergency water source – she also emphasised the important tikanga, or etiquette, of the practice.

“If you’re harvesting it, that is your intention, not pulling off a leaf while on your way to the shops or something,” she said. Ringi also spoke of the spiritual nature of rongoā.

She told the group that when engaging with rongoā, patients must be viewed in whole. Consideration must be given to their mentally, spiritually, physicality.

“When I do a harvest, I say a karakia of why I want that plant. Without the karakia, you might as well have GP medicine.”

Ringi said many plants have different pūrākau, or stories associated to them. She told the group of a pūrākau she once heard of kawakawa.

She said the leaf, which is heart shaped, was given to Papatuānuku (The Earth mother) to mend her broken heart after her separation from Ranginui (The Sky Father). And kawakawa, in addition to its medicinal properties is often used to make wreaths for tangihanga (funerals).

Ringi sells some of the rongoā she makes in the Maungatautari visitor centre, and introduces visitors of the maunga to rongoā rākau every second Friday.