Te Awamutu’s Menz Shed are showing off their community spirit again, by creating a replacement cross for Pukeatua Memorial Church. 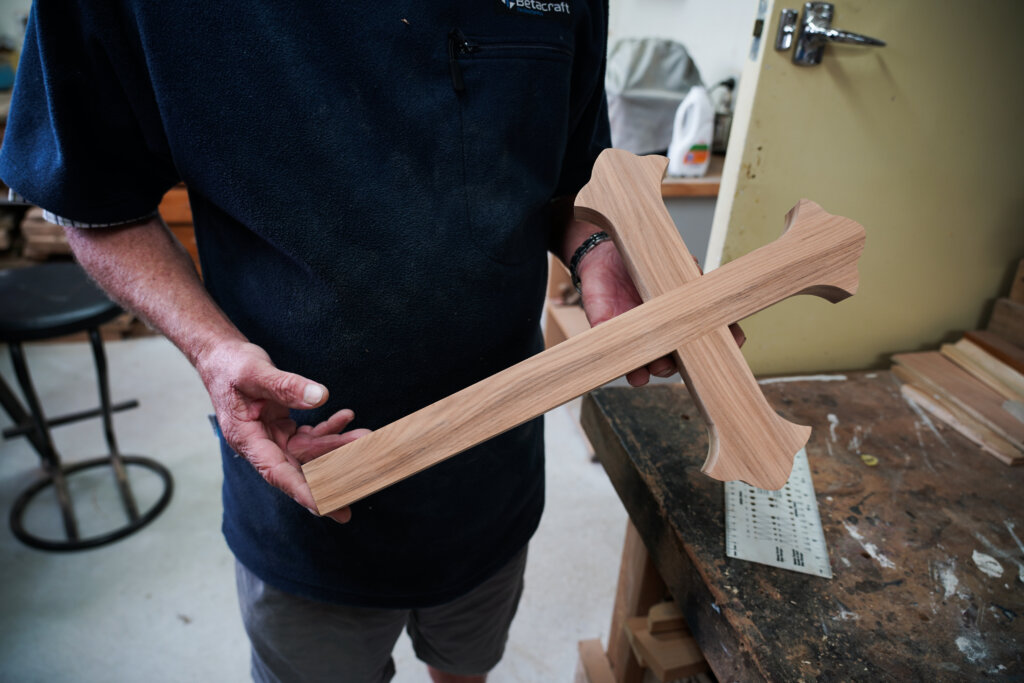 In January, a brass cross along with two silver challises were stolen from the memorial church.

Menz Shed only had a photo of cross with a ruler next it to design the replacement. After copious amounts of trial and error they sought help from Instawood Products to finish the design.

Like many of their projects, the replacement cross is made from recycled timber.

“Farmers would quite often ring and say, ‘we have got some timber sitting under the shed’,” vice chairman Steve Mannington said.

Menz Shed member, Richard Cato, who has overseen most of the work on the cross, says it should be completed this week and he hopes it can be given to the church on Monday. 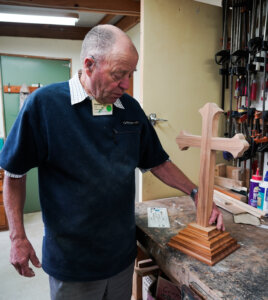 Richard Cato with the replacement cross that he helped to make.

The woodwork for the cross and its base is finished, all that needs to be done to complete it is the joining of the two pieces and final staining.

When Mannington was asked how he felt about being about to replace the church’s cross, he simply said, that is just what they do.

The cross is just one of many community projects undertaken by Menz Shed. Last year they made chair raisers for Freeman Court retirement village as well as a memorial seat for Kihikihi School.

Many of Menz Shed’s projects are undertaken on a donation basis, but some projects are commercial. The group regularly sell rat traps and has built picnic tables for Waipā Networks.

The money raised by these projects goes back into the club to keep it going and to fund future work. Last year they bought a $4000 bench saw and they have recently secured a second-hand heavy-duty lathe for just $100.

Another new addition to the club is its community Automated External Defibrillator – AED. The AED was installed outside the Menz Shed’s main building to fulfil safety concerns, and is available for use for anyone who may need it. “We are always looking for new members, particularly younger ones, we are all in our 70’s at the moment,” Mannington said.

A variety of talents fill the club, including gardeners, engineers, farmers, carpenters, and truck drivers.

“We have got people from all walks of life… we have all got a common thing, coming in our doing our bit for the community. A job will come in and then I’ll hunt around to find the right man to do the job.”

He says the club isn’t just about making things, it is also acts as a social outlet for the members.

“We have got some guys who come in and don’t have good health, they’ll come just for a cup of tea and a chat… quite often the wives would lead the men down here once they retire,” he said Later this month the club will be having a market day to help clear stock and to raise funds. They will be selling hand crafted toys and tools. Chopping boards, pull carts, and wooden diggers are just some of the items that will be available. Mannington says there is also the possibility of the club making extra items on request if they run out of something. Menz Shed made toys to be sold at their upcoming market day.

The market will run from 8am to noon on April 23 at Menz Shed’s workshop on 132 Raeburne Street. The club hopes to use money raised to paint their building.