On Saturday 9 April at exactly 10.36am the skies of Te Awamutu hummed with the sound of heritage aircraft as a Supermarine Spitfire, two T-6C Texans and a Grumman Avenger flew over our town.

During the Second World War, Avengers and Spitfires would likely have been just two of an array of planes in our skies, particularly with Te Awamutu being so close to the Rukuhia airfield which was a key RNZAF base during the war.

To celebrate the 85th anniversary of the RNZAF, the Air Force Heritage Flight (which replaces the former RNZAF Historic Flight) was formed to ensure the nation’s military aviation heritage is kept alive and on frequent display throughout the country – including through flypasts, such as that which saw four heritage aircraft pass over our town on Saturday morning. 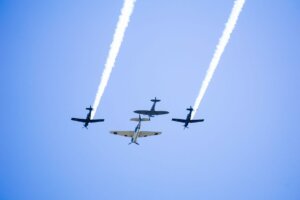 The first flypast to celebrate the 85th anniversary of the RNZAF took place on April 1, with subsequent flypasts covering just about the entire breadth of the country since then.

With ANZAC Day just a short while away seeing these aircraft in our skies felt doubly poignant.