Mary Anne Gill talks to whānau and friends and tells the story of Margaret Evelyn, a victim of last week’s storm in Cambridge, which claimed two octogenarians. Margaret Evelyn was on her way back from a regular workout at the gym and walking towards her Queen Street home in Cambridge shortly before 10am on Friday when the freakish winds hit.

She sought shelter at a picnic table in Victoria Square under an 80-year-old pin oak tree – ironically about the same age as Marg – which seconds later was uprooted and fell on her.

A woman from a nearby café sat comforting Marg and later reassured the family she was very calm, answered all the questions being asked of her and was aware of everything that was happening.

But soon after noon in Waikato Hospital her heart stopped. Doctors could do no more for the energetic grandmother who always insisted she did not want a funeral service – just an afternoon tea “without Marg”.

Her youngest son Kristen Hapi, who lives in Hamilton, got a call from police about 10.30am to say his mother had been in an accident.

Her close friend and neighbour Penny travelled in the ambulance with Marg to Waikato Hospital where Kristen soon joined them.

Medical staff quickly assessed her and told him his mother had no head injuries, but they were going to get some CT scans and he could go and pick some items up for her.

Although she was heavily drugged for the pain, medical staff said she could hear him.

“So, I gave her a hug and I said, ‘I love you Mum, I’ll be back in an hour’ but half an hour after I left, I got a call ‘you’ve got to come back now’ and when I got there, they said her heart had stopped and they’d done all they could.”

The fit and feisty 81-year-old mother of three and grandmother of three had died, the victim of an accident in the Town of Trees, the town where she settled nine years ago after a working life helping young people and advocating for her three children.

Kristen told The News on Tuesday that his cousin from Auckland was right when he arrived at the hospital and said to him: “The tree didn’t kill your Mum. The wind killed her and the tree.”

“They were two 80-year-olds going out large,” said Kristen.

“Mum loved trees; she wouldn’t have blamed the tree. Her number was up. Here’s the thing I know, she would not have wanted to be sitting in a wheelchair with pins in her. She would have said ‘stuff that, thank you and goodnight’.”

She was born Margaret Evelyn Freundlich on July 26, 1940 in New Plymouth, the daughter of Jewish Austrians who escaped the holocaust and settled in New Zealand.

She grew up in Taupo, ditched the surname in favour of her middle name and went on to train as a primary school teacher. She learned Te Reo at Waikato University so she could stand up for the rights of her three Māori sons. She went on to become one of the country’s first bi-lingual teachers at Rakaumanga Kura Kaupapa Māori.

She moved to the Children and Young Person’s service (now Oranga Tamariki) in the late 1980s working in Huntly and then as a community liaison social worker. 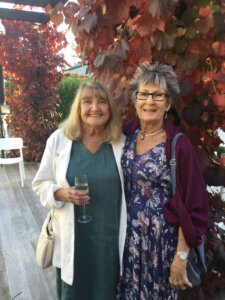 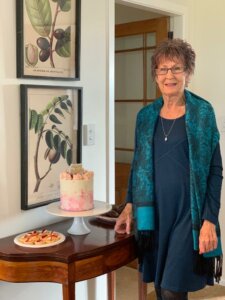 Margaret Evelyn, right, with her nephew Steve Freundlich, his partner and Kristen Hapi. 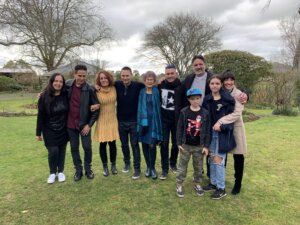 Another photo showing how stylish Margaret Evelyn was.

Happy birthday to you, Margaret Evelyn.

In a message to current Oranga Tamariki staff, a spokesperson said Margaret was principled, uncompromising and persistent when it came to advocating for the rights of tamariki and whānau.

She had a great command of language and was never stuck for words or afraid to express an opinion.

Carol Havill, her team leader in Hamilton, said Margaret was very good at her job but could sometimes be a proper thorn in the side of her managers. Because she spoke fluent Māori she could go anywhere and front up to people.

After Margaret divorced her sons’ father, she lived in Raglan. “From the time she became single again, she became fiercely independent,” said Kristen. He and his brothers Brett and Campbell are all talented musicians, and Margaret loved nothing more than going to see them at gigs.

When she sold her house in Raglan a decade ago, Margaret stayed with Sue and her husband Richard Edge in Cambridge until she found the two-bedroom house in Queen Street she was heading home to on Friday to catch up with a friend who was waiting there for her.

“Marg had a strong network of friends that she kept in contact with,” said Sue.

“She was a great reader and movie-goer who loved to debate the messages portrayed and how they related to society. She cared about human rights.

“She was a critic and letter-writer about advertising or any media that showed bias.”

A health and wellness fanatic, Marg went to the Anytime Fitness gym most days calling it her “happy place.”

She swam regularly too at the Cambridge pool usually walking there and around Lake Te Koo Utu shaming Kristen more than once by walking briskly up the paths back into town.

“Her active and interested outlook made her seem so much younger than her 81 years,” said Sue.

“Margaret’s world view and philosophy gave her a strong standpoint to comment on the world. When her own concerns stood out, she would say things like ‘it’s nothing at all. I don’t live in Ukraine’,” said Sue.

A stickler for her own appearance, she would not go out if her hair was not right, always managed to make time for a pedicure and dressed stylishly.

She was a staunch feminist, anti-racist, atheist, LBGT community ally and a defender of end-of-life rights. Margaret wanted no fuss for her farewell. She left strict instructions for after she died – there was to be no embalming, she was cremated in a no frills’ box yesterday (Wednesday) and the ashes put in a basic urn. “Do what you like with the ashes,” she said in a note left for her family.

She also did not want a funeral service and instead wants an afternoon tea “without Marg” in Cambridge later for friends and family.

A blessing was held at the site on Sunday led by Ngāti Koroki Kahukura and including mayor Jim Mylchreest. Deputy mayor Liz Stolwyk also attended and told The News the oak tree would be milled and a memorial using timber from it would be erected alongside the heritage shed. A new tree would be planted in memory of Margaret Evelyn.

“She would be honoured by that,” said Kristen. The base of the Pin Oak uprooted during the storm.