These are some of the horrors that Waipā residents have left for people like Pare Te Huia to sort, by hand, out of their recycling. 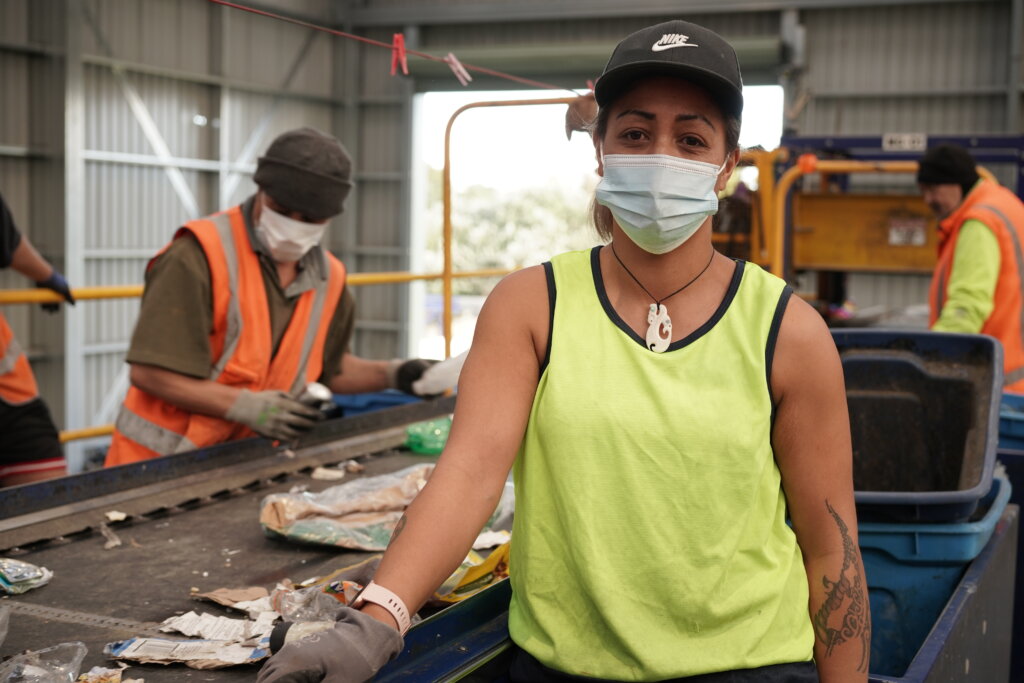 Pare Te Huia is “disgusted” with what some Waipā residents think is okay to recycle.

She is the second leading hand at Metallic Sweeping, the company who collect and sort the district’s recycling. She and two other workers vomited last week after human faeces were smeared across their sorting line.

“People need to see what those people up there (on the sorting line) are dealing with on a daily basis,” said site operations manager, Rob Hamblin.

He said they encounter contamination every day. Last year, it cost the resource recovery company up to $40,000 a month to dispose of recycling that had been contaminated. 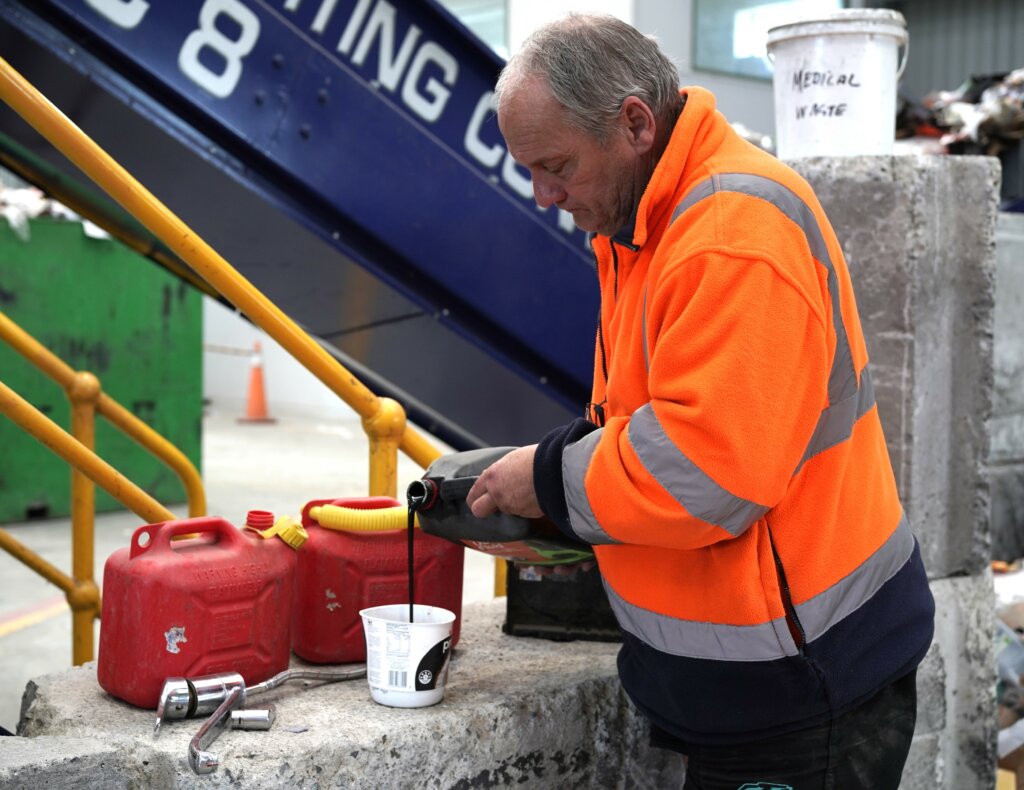 Rob Hamblin pours out used engine oil that was improperly disposed of.

Trevor Sheldon, Metallics Sweeping national operations manager, said that during transportation, one contaminated recycling bin can contaminate up to 500 houses worth of recycling.

“All that has to go to landfill,” he said.

“It is a national problem; it is not a Waipā only problem. But it seems to be more intense here than some other places.”

Hamblin said the district’s worst offenders are Kihikihi and Leamington, but reiterates that at large, it is the entire community who is responsible.

The poor recycling habits of parents are setting a bad example for their children, said Te Huia.

“Is that the type of education that our tamariki will be brought up with?” she asked.

The day after human faeces contaminated their sort line last week, a bucket of paint did the same thing, causing the company to halt all processes for 45 minutes while they cleaned the mess up.

“We are trying to make a difference. We are trying to leave something for future generations. But we are just battering our heads up against the fricking wall,” Hamblin said.

Mincemeat also made its way to the sort line last week, causing another shutdown. 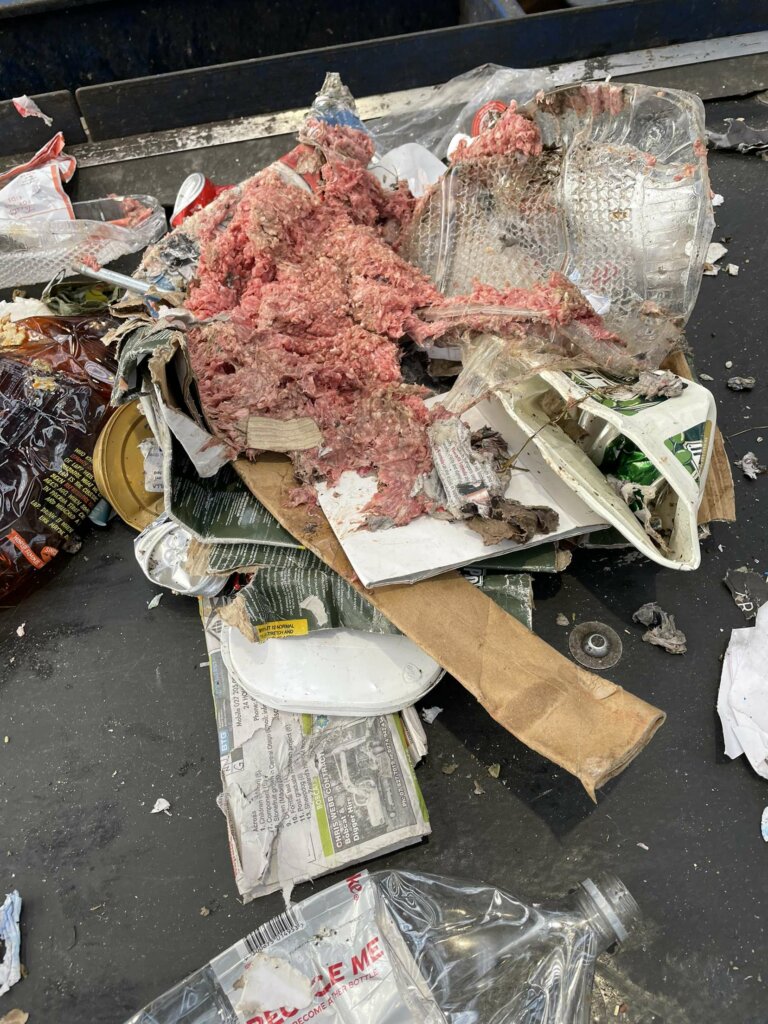 Mincemeat was spread across their sort line last week.

“Over the last week, my staff have had an absolute gutsful… basically, what they are telling me is ‘if you can’t get this problem sorted out, we don’t want to work here anymore.’ And, if we don’t have the staff to work it, we can’t pick up your recycling,” said Hamblin.

Pickups from around 30 Waipā houses were suspended last year, due to repeated misuse of the service. Jennifer Braithwaite, the council’s operations team leader, called the behaviour blatant laziness.

“They know very well they shouldn’t be putting these things into their recycling,” she said. “They need to stop this; this is not the service we provide. This is not what these people were employed to do.”

She said things like medical waste should be double bagged or placed into sharps containers before they’re sent to landfill, owners of industrial containers used for oil or solvents, should consult transfer stations before disposal. And, if people are unsure of what to do with their materials, the council has information on what can and can’t be recycled online.

“Clean, washed-out recycling, that is the service that we provide. It is not a rubbish service, and it is not a free for all, for people to put whatever they want into those bins.” Hamblin said that his workers could be infected by an STI, if they were stabbed by a used syringed like this one.

Hamblin said a worker was once stabbed by a needle. They had to wait 14 days before their doctor could tell them that they weren’t infected with anything.

“They’ve all got families they want to go home to. They don’t want to get sick from human faeces or catch something off syringes or medical waste. What is it going to take until people wake up and realise this has got to change?”

Two Waipā district councillors have broken ranks saying they are unconvinced banning alcohol sponsorship and advertising under proposed law changes to the liquor act will have any impact on youth use. Roger Gordon and Grahame…

No-one was in any doubt – Margaret Evelyn would have hated missing such a great party on Sunday at the Cambridge Cricket Pavilion. The ‘Afternoon Tea without Marg’ celebration attracted more than 100 people…

Waipā’s immunisation rates for pensioners is well below the Waikato average as a season marked by severe flu takes hold. And in the face of growing numbers of flu cases, numbers of people lining up…

A special lunch for the seniors