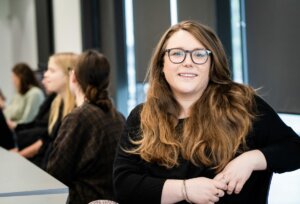 Kate Symmans founded The Artistry Huddle to help artists get the support and criticism needed to become confident in their work. Photo: Benjamin Wilson

A Kihikihi artist’s formal critique programme aims to help other creatives connect and gain confidence in their field.

“There is a sense of needing support and connection, but as a practising artist you don’t really have that anymore.

“It is nice to hear if something is working really well, and if it is not working well, it is good to hear what that is,” said Kate Symmans, founder of The Artistry Huddle.

Symmans said when she completed an arts degree at Wintec 10 years ago, she struggled creating without the support and peer feedback that tertiary education provided.

She said that feedback can be gained during exhibitions, “but how useful is that feedback once your artwork is on a wall and is already on display?”

To help other artists get that feedback, she founded The Artistry Huddle after being a successful applicant of the Waipā Creative Communities Scheme earlier this year.

It is a 12-month formal critique programme, in which 10 artists meet monthly at the Te Awamutu Library to critique and support each other’s works. “That support during the making process is something that I think practising artists don’t really have… I wanted to offer that to people who weren’t in a position to return to tertiary education.”

The Huddle had their second session last Saturday. The artists each had five minutes to introduce their work, five minutes to answer any questions, and 10 minutes to receive feedback from the other artists.
Symmans said that they appreciate the connection and support that her programme offers, in addition to its constructive nature.

“Once you’re out there making artwork, there are very limited spaces where you can connect with other artists,” she said.
Symmans is based in Kihikihi and is the branch manager of Gordon Harris in Hamilton, and also their education account manager for Waikato, Bay of Plenty and Gisborne.

“Because this was the first time I’ve tried anything like this, it was important for me to offer it to my local community first,” she said.
The Artistry Huddle is currently at capacity, but Symmans plans to open applications for further programmes next year. 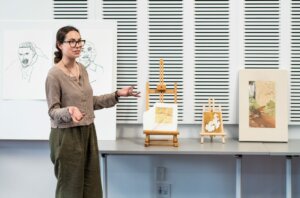 Freelance illustrator Jullian Barnard was the first to share her work on Saturday.  Photo: Benjamin Wilson