Time to harden up 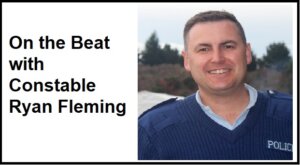 Recently in Te Awamutu we have seen a surge in burglaries. These are occurring both rurally and in the urban area. While I won’t go into the details of the investigation in a public forum, I will discuss some points to help make you less likely to become a victim of burglary.

Target hardening is a simply making your home, business and car harder to break into. Theft of tools is increasingly common and they are a valuable commodity, especially for tradesman victim who not only loses the value of the tool but also income through downtime. I suggest a secure lockbox as a method of protecting tools as an example of target hardening.

This week I attended a neighbourhood support meeting at Korakonui. I was introduced to a great concept there about target hardening. Get your neighbours involved and try to see what they can take from your place and vice versa. See how easy it is to get into the garden shed etc.

The idea is a fresh set of eyes on your property makes it harder for an opportunist.

Tools, as a I said earlier, are a highly sought after commodity. They are costly to replace and for tradies losing them are a massive inconvenience. I urge everyone to record the serial numbers of the tools, no matter how expensive or cheap. It makes it easier when we are doing search warrants to link property back to burglaries and hold people accountable.

Often we find obviously stolen property while executing search warrants. We have the ability to search up serial numbers on our phones on the police computer system. If an item has the serial number recorded to the burglary/theft file, we can link it back.

I once found a video recorder stolen in 1989 at a search warrant tucked away in a wardrobe. If there is no serial number, engrave your drivers licence number to the item. This way it links back to you and you alone.

And last word, I promise. I urge you to report to police on 111 any suspicious activity as its happening. You never know which piece of the puzzle you are seeing. Report, report, report.