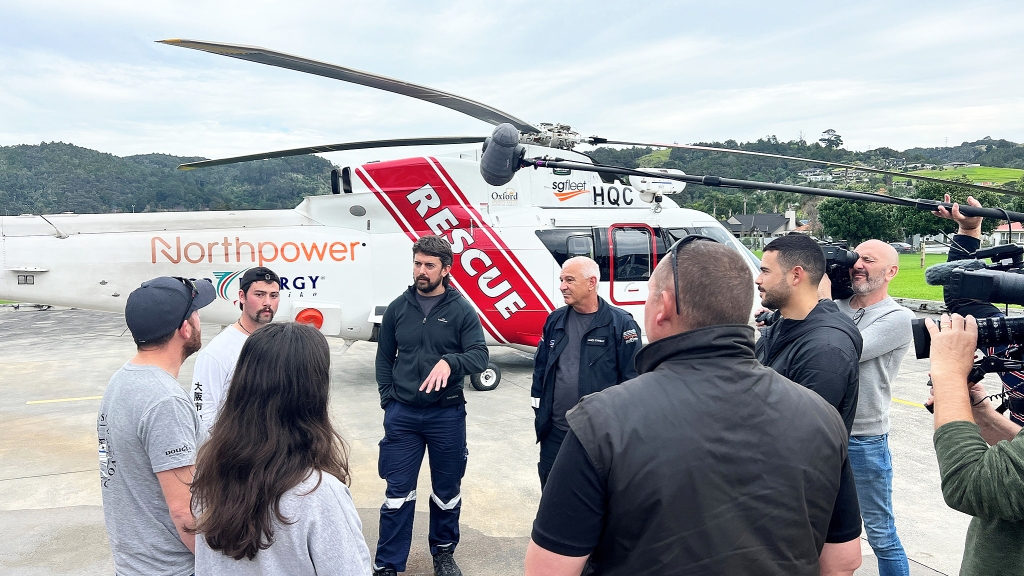 In Newshub Investigates: The Enchanter Tragedy which aired last night on Three, the big game recreational fishermen described how the 16.5-metre vessel was flipped by a rogue wave on the return journey from Manawatāwhi / Three Kings Islands.

Enchanter’s skipper Lance Goodhew, one of the five rescued, is under investigation by Maritime New Zealand and the Transport Accident Investigation Commission and declined to be part of the One-Hour Special.

His deckhand Kobe O’Neill joined Ward, Stinson, and Cook, paying tribute to the first rescuers to reach them after four hours in the ocean.
“Those guys at Northern Rescue Helicopters are amazing. We wouldn’t be here today if it wasn’t for them,” said Cook.
“What they did to get us out of the water and to find the other guys eventually was amazing. I owe them everything,” Stinson added.
Newshub was there as two of the Waikato survivors and the deckhand visited the Whangarei base of the Northland Rescue Helicopter crew.
The men say they are “indebted” to pilot Lance Donnelly, co-pilot Alex Hunt, winch operator Paul Davis and rescue swimmer Josh Raravula.

Donnelly, visibly touched by the reunion, said: “It’s really special, we don’t see people we rescue very often, so yeah it’s really good to have them visit.”
The 10 men were on the “big game fishing trip of a lifetime” with Enchanter Fishing, when Goodhew’s charter boat hit trouble 20 minutes from where they were due to drop anchor for the night.
Goodhew has faced criticism for taking the charter out as a major storm was hitting Northland and Auckland, but the survivors are speaking out saying there are lots of misconceptions about the trip and they “want to set the record straight” and thank those who gave them another shot at life.

“It was relief, almost disbelief at what we had just been through and survived,” remembers Ward – who said the rescue was “certainly not like the American movies where you get Ashton Kutcher jump out of a helicopter in a basket – it’s literally a person swimming in the water on a wire rope”.

They’re now launching a fundraising campaign to buy ballistics helmets, priced at $5000 each, for the Whangarei-based helicopter crew.