When the Cows come Home 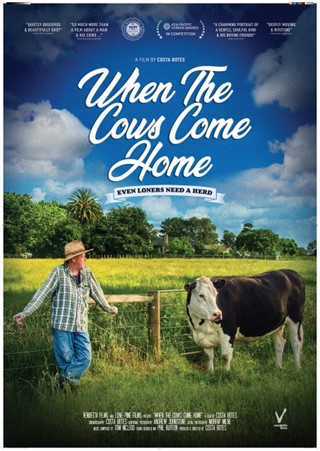 In mid 2020 I got a Facebook friend request from veteran Kiwi filmmaker Costa Botes. Why is he friending me I wondered? Later after a screening at the 2022 NZ International Film Festival, Costa explained to the audience that he sent me a friend request thinking I was someone else.

My Facebook posts were then as now mostly about my cows, I’d describe my observations and interactions with accompanying photos then one day Costa messaged and said, “I thought cows were just numburgers but your stories are making me think again.” Not long after he messaged again and said, “These cows of yours……there might just be a film here.” Turns out there was. Filming started in January 2021 and wrapped later in the year. “How do you feel about revealing so much of yourself?” I’ve been asked this at every screening and the honest response is that I wasn’t actually aware. Costa followed me about with his camera asking questions and caught up in the moment I answered openly. People have told me how much they appreciated that honesty and now that my misdemeanours and tragedies are public knowledge it’s neither here nor there. As with the good in life, the bad offers us opportunity for reflection and growth and all of it has made me into the person I am, a pretty standard story that most can relate to.

As for the film itself I had no idea what to expect. The result turns out to be a beautiful and edifying film about a bloke and his cows. It surprised me and it surprised me even more to see how it affected audiences. There were tears and laughter and a palpable sense of joy at the NZ International Film Festival screenings.

After the three sold out screenings in Hamilton Costa said that he had never had such a positive emotional response to any film he’d made or as one Wellington attendee said “It was a wonderful experience and I wasn’t ready for it to end.”

It’s a rare thing for a big screen feature to be made in the Waipa and the only other film we could think of that wasn’t The Lord of the Rings was Greg Page’s 2003 horror The Locals, which was filmed out the back of Te Awamutu. So in that light we are putting on two special screenings for local audiences before the film goes on general release in November.

First up is The Tivoli Cambridge on Wednesday October 26 at 7pm. This is a fully catered event with limited tickets.

The Te Awamutu screening will be at the historic Regent Theatre Thursday October 27 at 6pm.

The director Costa Botes and myself will be at both screenings to answer questions and I’d bring the two other stars along as well but my special cows Tilly and Maggie and getting a bit big for carting around the countryside.