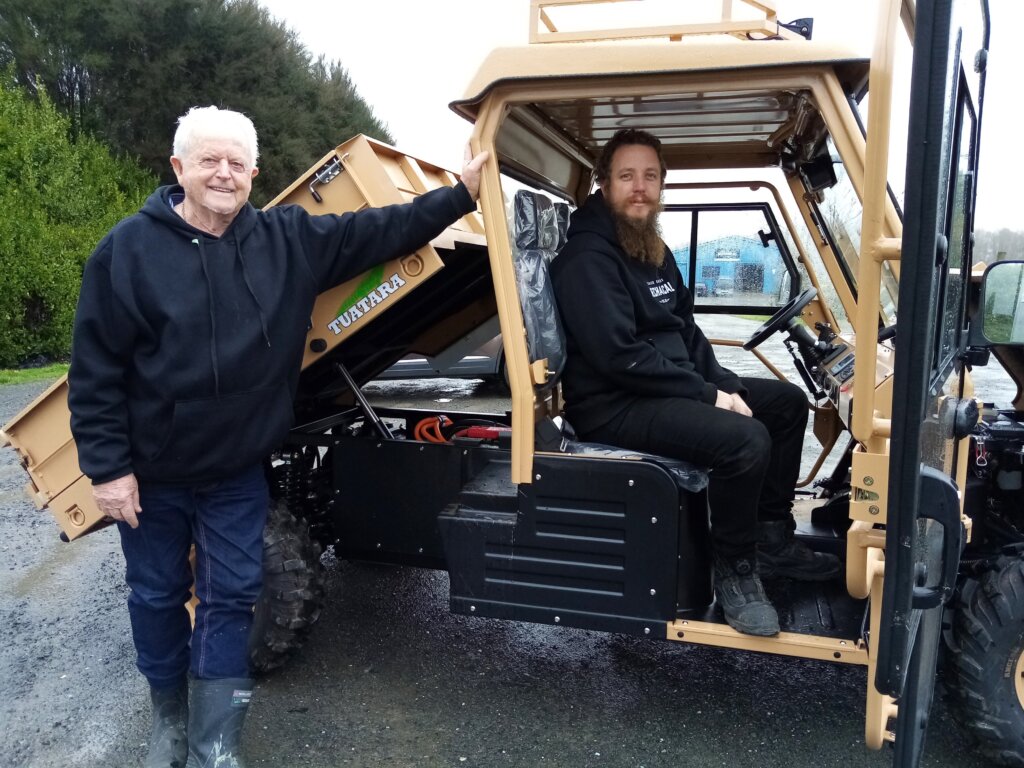 Allan Barclay, left, pictured with one of the service crew Seaton Black, in one of the Tuatara ATVs.

Ōtorohanga musicians and entrepreneurs, Allan and Jan Barclay, will be at the National Fieldays later this month to help market the grunty petrol and electric Tuatara ATV, said to be one of the best vehicles of its kind for New Zealand conditions.

They have the King Country Waikato dealership for the vehicle and reckon interest is high in the region, primarily because the vehicle is made to specifications best suited to New Zealand terrain in pretty much all weathers.

Keen as they are to tackle that task, there is much more to the Barclays than meets the eye. 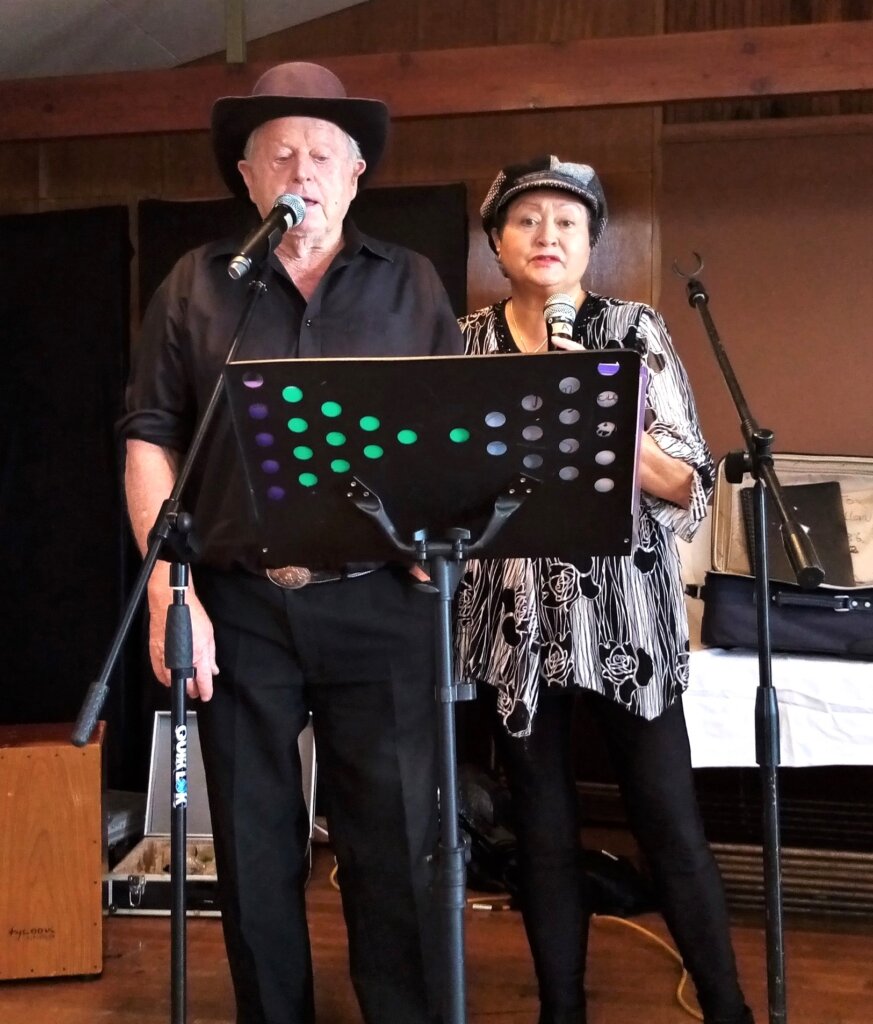 Ōtorohanga musicians Allan and Jan Barclay – aka The Jan Alz Band – performing at an event in Te Awamutu.

Allan, a man with his roots in the King Country, has amassed decades of experience in the automotive trade, particularly as it relates to the agricultural sector.  He did his apprenticeship 50 years ago in Te Kuiti, segued into the AA for a couple of years, bought a service station in Tirua then moved to Wellsford as service manager for a Ford dealership.  He moved back to Te Kuiti where he started servicing tractors in 1967, then started a Massey Ferguson dealership in the area, but when Rogernomics hit hard, he moved to Walsh Motors in Cambridge where he remained in management for 25 years before retiring about eight years ago.

Some 15 years ago, Allan met Janice ‘Jan’, a singer-muso with lengthy connections to the well-known Lingman family, a name synonymous with Pirongia.  The group, comprising Jan and her siblings and known as The Highlighters, made quite a name for themselves, recording albums and doing floor shows and television appearances.

Once they joined forces, the Barclays decided to open a B&B in their Ōtorohanga home; it was from there that their different backgrounds and entrepreneurial tendencies found a way to work in unison.

Jan set up a music studio from where she records and teaches – she does vocals and plays guitar, ukulele, piano and the drums.   Allan, who knows rural vehicles like the back of his hand and wasn’t overly keen on retirement, opted for familiar turf and launched Waitomo ATV Farm Tours, which until Covid closed the door to international visitors, was enormously successful.

The couple work together on everything, with Jan providing ukulele and poi demonstrations to their guests along with mini concerts and sumptuous breakfasts.  They formed a musical duo, The Jan Alz Band, and quickly found themselves on the entertainment circuit for fundraisers, at retirement homes and at other events.

It was the move to start the Waitomo ATV Tours that brought the Tuatara across Allan’s radar.  He needed the most rugged yet comfortable vehicle possible to showcase the region’s spectacular scenery, and found the Tuatara was a perfect fit.

“Its point of difference is that it is made uniquely for New Zealand conditions.  I took on the dealership in this region only recently, once I could be certain that we were able to provide the all-important service element,” he said. “The one thing I have learned through the years is that you have to have an excellent service network in place before marketing anything.”

The vehicle is developed in Christchurch by Tuatara co-rounders Geoff Hill and Qingmei Pang and is manufactured offshore.

The Barclays will be at Fieldays 2022 from November 30 to December 3. 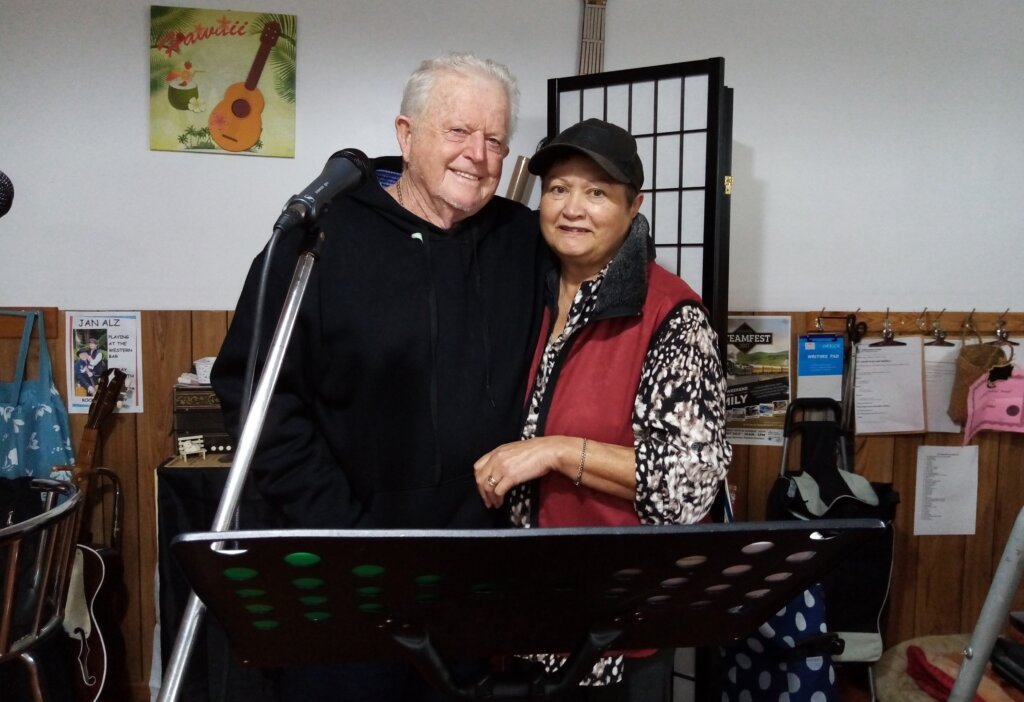 Allan and Jan Barclay in the home music studio.