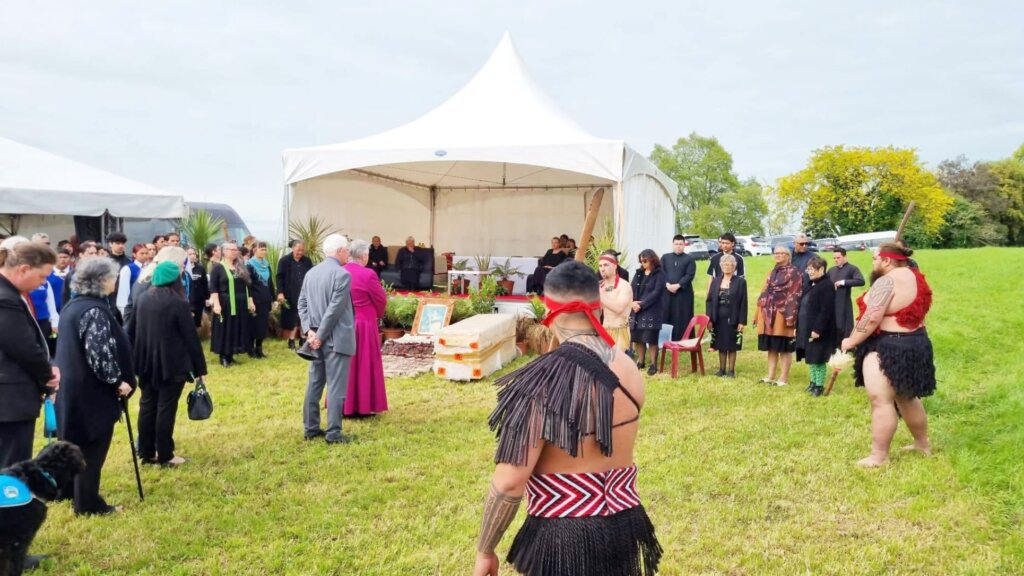 Waipā iwi and the Anglican Church are about to make history for the second time in a week.

The Church will transfer the land deed for 61 Rangiaowhia Road to Ngāti Apakura and Ngāti Hinetū during a ceremony on Saturday.

They purchased the historically significant whenua from a private seller in March, with the intention of giving it to the mana whenua when they were in a position to purchase it for themselves.

In April the whenua was blessed by the church during a service that acknowledged their support for the hapu.

“The support that we offer must be real, it must be down to earth, it must be total. This opportunity for land return represents something of that support today and forever,” said Archbishop Philip Richardson.

The upcoming transition of ownership comes just a week after they returned a taonga to Ngāti Maniapoto in honour of Te Pūtake o te Riri, He Rā Maumahara – a Commemoration of the New Zealand Land Wars.

Last Saturday the Church returned a chiefly kaitaka (cloak) that belonged to the Ngāti Maniapoto chieftain Rewi Maniapoto to his iwi during a service at Ōrākau.

“It was a great privilege for the Anglican Church to be asked by Ngāti Maniapoto to find and negotiate the return of the unique kaitaka of Rewi Maniapoto,” said bishop David Moxon.

Rewi was a leader of the Kīngitanga movement, and played a critical role in defending Ōrākau Paewai during the Waikato Wars of 1864.

Moxon said his kaitaka was lost in a linen cupboard in England for 140 years.

“Because the family who owned it were Anglican, Maniapoto approached the Anglican Church to talk to them about getting it back,” he said.

Rewi gifted his kaitaka to a pākehā neighbour, Thomas Grice, as an offer of reconciliation and renewed partnership in 1878.

But Grice returned to England and Rewi’s cloak was lost to history until it was rediscovered by a descendant in 2019.

“We then arranged a slow and confidential process to secure it,” said Moxon.

He said that Rewi was a supporter of the first missions in the Waipā area in the mid-1800s, and that the church’s help to return his kaitaka “was a way of respecting that partnership.”

“It was an act for both parties to meet again under new circumstances.”