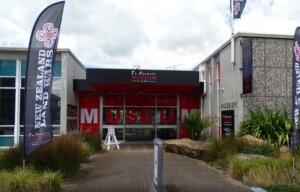 A new report shows Te Awamutu’s closed museum reaches only 20 per cent of the National Building Standards – and gets a Grade D building rating.

The news has raised suggestions the town could even get a pop up museum.

The news was revealed by Waipā District Council this week in a statement announcing the building, evacuated last month, would remain closed for “some time”.

Chief executive Garry Dyet said it was clear no-one will be moving back into the building in the near future but he could not be more definitive around timeframe. Council was now looking for alternative accommodation in Te Awamutu to house displaced staff, he said.

“That also means the museum will remain closed until we can work through the options. We are considering a pop-up museum but obviously we need to work alongside the Te Awamutu Museum Trust Board and mana whenua,” he said.

“The reality is that we will not be able to move much of the collection to a pop-up space because there are issues like climate control to consider. In the meantime, museum staff are still able to fulfil contractual requirements with the Ministry of Education and are working on other opportunities to promote our district’s heritage.”

Council was working through potential remediation options for the building but was relying on external expertise.

“That’s also going to take some time and there are a lot of issues to consider, including financial issues.  So I don’t think there will be any decisions made about the future of the building, quickly.  In the meantime, our focus is on getting the bulk of staff back into an office and sorting out a potential museum option.”

Of the 78 displaced staff, some were working from home and others had managed to find space in either the Te Awamutu or Cambridge offices.

“It’s not ideal but staff have been fantastic and have got on with the job as best they can. I’m grateful to them but we need to find a better solution.”