Algal bloom: next wave is coming 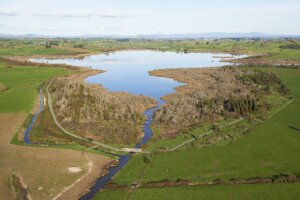 Lake Ngā Roto became a death trap for birds and fish at the start of the year.

Waipā’s Lake Ngā Roto will be hit by an algal bloom breakout over summer.

It’s not a question of if, but when, Waipā District Council community services manager Brad Ward says.

“The impacts of climate change mean our summers are hotter and water temperatures warmer than in previous years, so it’s the ideal breeding ground for algae,” he said.

The council says it has action plans in place to enable a streamlined response to  an algal bloom – cyanobacteria – outbreak.

“Our action plans can be deployed at a moment’s notice, even when the council office is closed over the Christmas break – which is where we came unstuck last year,” Ward said.

“While it’s difficult to prevent blooms,  we aim to communicate quickly with mana whenua, the public and have a more streamlined response with partner agencies to mitigate damage caused by the algae,” Ward said.

Algal blooms forced the closure of recreational activities on the lake and the walking track last summer when a public health warning was issued. There was an extreme risk of lake users being exposed to cyanobacteria and E.coli.

Waikato Regional Council uses satellite imagery to detect algal bloom in the lake, and the recent installation of new monitoring sensors will give an early warning before they arrive.

There are a total of 31 peat lakes in Waipā and Waikato districts and Hamilton city.

They form the largest collection of peat lake habitat in the country and  represent some of the few remaining areas of wetland once part of the formerly extensive Komakorau, Rukuhia and Moanatuatua peat bogs.

Peatlands take thousands of years to develop and are valued for their unique genetic diversity lakes – but are susceptible to fire, increases in nutrients and the effect of drainage.

With a surface area of 108 ha, Ngā Roto, home of the Te Awamutu Rowing Club, is the largest Waipa peat lake.