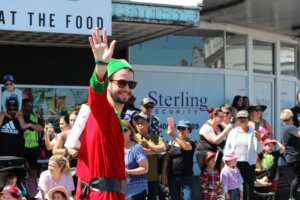 All Luke East’s Christmases are coming at once.

The ardent Royal Family fan was among the prize winners at this month’s Te Awamutu Christmas parade, and now his latest project for the community is about to come to fruition.

A plaque commemorating the visit of Queen Elizabeth to Te Awamutu almost 70 years ago and her platinum jubilee will adorn the former Post Office building, occupied by House of Travel, on the Soane St- Alexandra St roundabout from Sunday.

The latter came in August, via a letter from Tom Laine-Baker, assistant private secretary to the Queen who wrote “The Queen has asked me to thank you for your proposal for the installation of a plaque to commemorate the Platinum Jubilee and Her Majesty and the Duke of Edinburgh’s visit to Te Awamutu in 1954… I am pleased to confirm that The Queen has given approval to your design”. 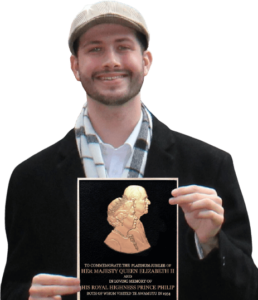 The Te Awamutu Community Board put up some money and a givealittle page added some more – but when the Queen died on September 8, Luke was still about $600 shy of what he needed.

This time the community board decided – at its last meeting before the local body elections – it would provide the funds needed.

Luke East said he and mayor Susan O’Regan will unveil the plaque at 3pm on Sunday.