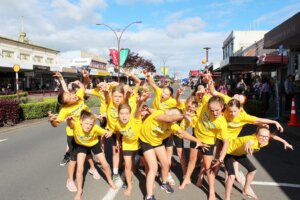 Youngsters from Puahue School warm up for their performance during Black Friday celebrations on the back of their win in the Xtreme category at the Jump Jam North Island Competition.

The top end of Alexandra St was closed off to enable entertainment to be set up in the town centre, and Heslop was delighted to see a packed street for 90 minutes to 8pm. 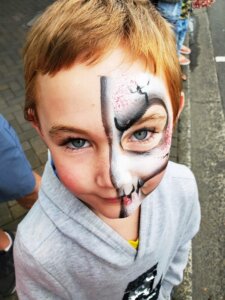 Cooper Buchanan took the opportunity to get his face painted. Photo: Te Awamutu Chamber of Commerce.

“Feedback from our retailers has been that it was a great night for them and stallholders, performers and social media comments from attendees has all been positive,” she said.

The event also escaped the ongoing threat of rain.

Heslop indicated a debrief will look at how to encourage more shops to remain open, and having an early draw for the shoppers competition “but I think Te Awamutu remembered what it feels like to be a community last Friday night which is what the Chamber was aiming for”.

She said the main aim was to support Te Awamutu retailers… “I feel we did just that”.

The event, which enjoyed considerable support from sponsors and volunteers, looks a certainty to be added to the 2023 calendar. 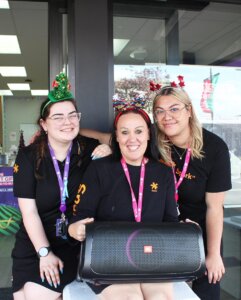 The team outside the Spark shop was keeping in tune…, from left, Chloe Hapi, Aimee Coleman and Dellayne Ratima.