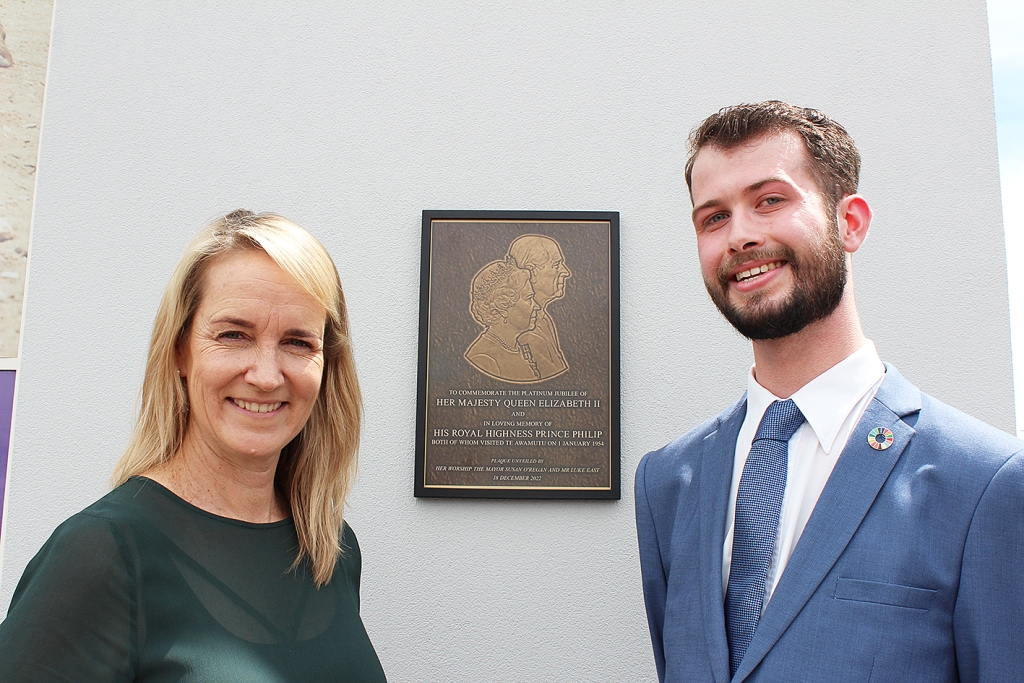 Mayor Susan O’Regan with Luke East after unveiling the plaque.

Royalist Luke East’s campaign to have a plaque acknowledging the late Queen and Duke of Edinburgh was fulfilled in a ceremony in Te Awamutu on Sunday.

But there’s a twist in this two-year-old tale.

From before the death of both royals, East has sought to have a plaque attached to the former Post Office building in the town centre to acknowledge the Royal visit in 1954 and Elizabeth’s platinum jubilee.

But when invited guests gathered on Sunday for an unveiling – 32 days shy of the 69th anniversary of the visit, East revealed the “real” plaque was still in transit.

It was thanks to some quick help from Waikato Stonecraft that he was able to have a substitute plaque to unveil.

East isn’t sure when the genuine item will arrive – but with a month long trip back to his native England commencing with a flight yesterday, he’s expecting it will arrive when he’s away.

Mayor Susan O’Regan, speaking to an audience which included district councillor Lou Brown and community board chair Ange Holt and newly elected deputy Kane Titchener, acknowledged her speech had been prepared with some information provided by “the font of all things Royal”.

She paid tribute to East’s foresight, saying it took a champion “to bring things like this to life”.

Building owner John Dill was also among those to watch the unveiling.

The Queen and Prince Phillip visited Te Awamutu in January 1954, and she was the first monarch to step foot in the town. The young Queen visited 46 towns and attended 110 engagements during the tour. Meanwhile East says he has watched all six episodes of the Prince Harry-Megan Markle Netflix exposé having gone into with a sceptical view.

But having watched it he says it shows what the couple went through in terms of the horrendous abuse they suffered.

“No one should go through that whether or not you agree with them.”

East said he had experienced something similar on line  – including death threats, trolling and false accounts being created in his name – when he was a National party activist.

He said it was sad that there was an obvious rift in the Royal Family and hoped King Charles could help resolve it.