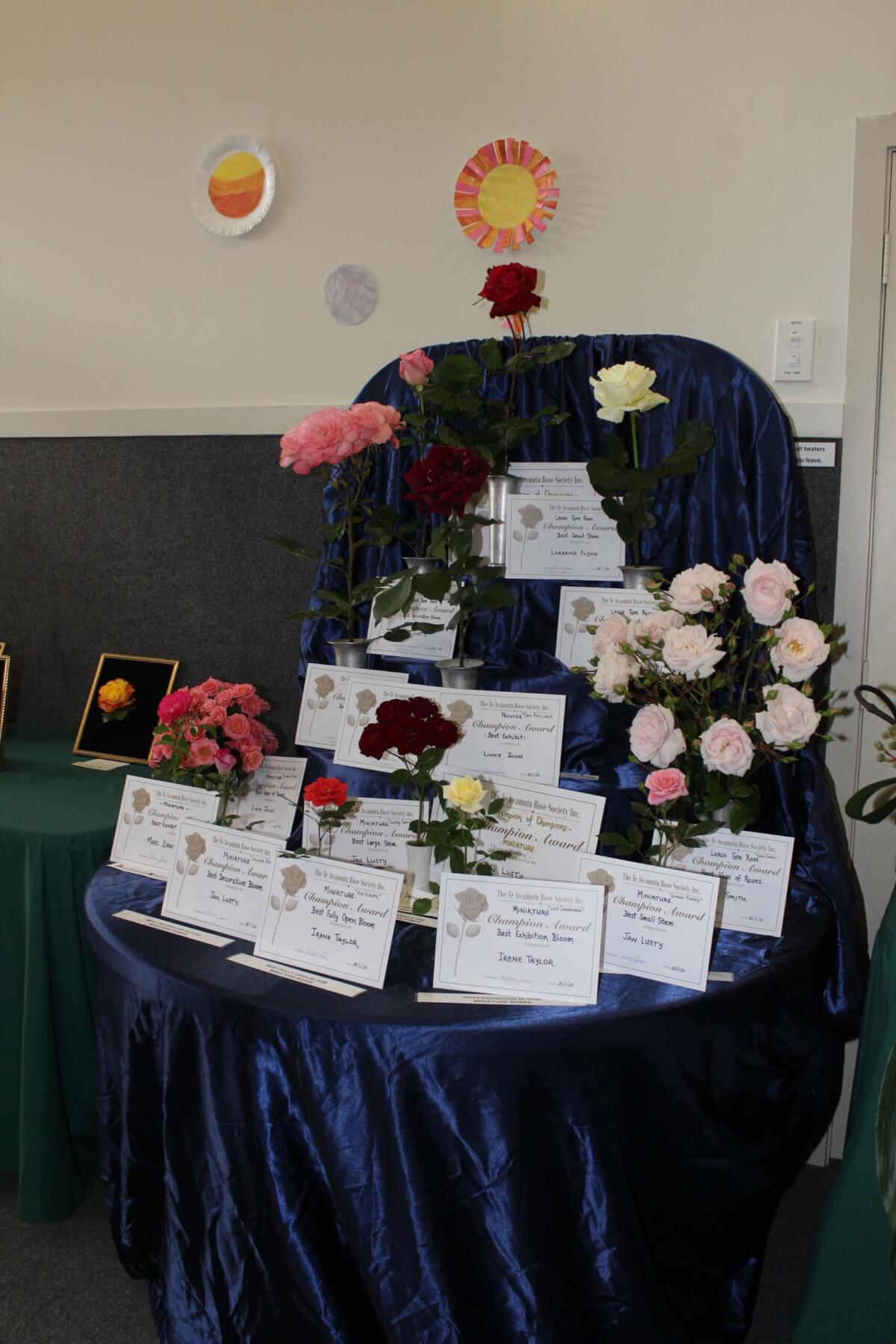 Everyone’s a winner – the champions’ table at the rose show 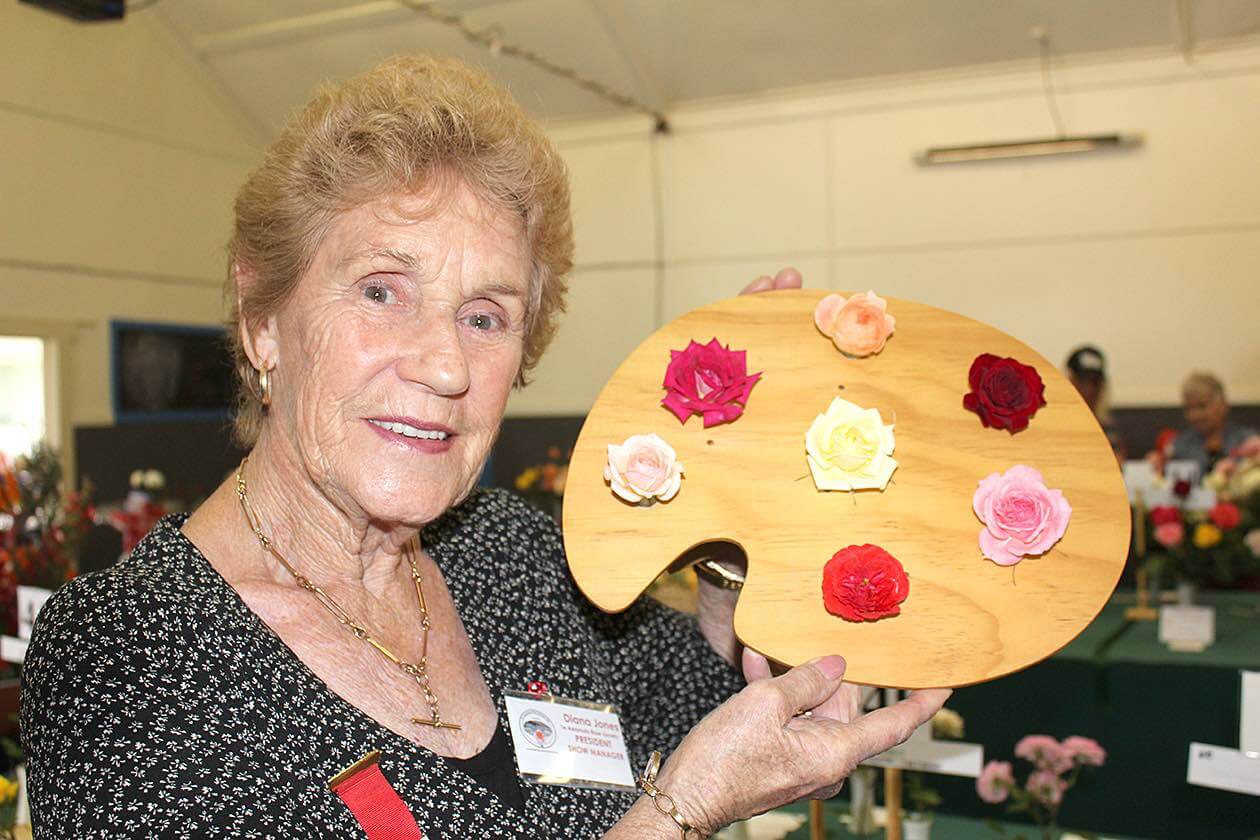 Society president Diana Jones with her winning entry in the artist’s palette of miniature roses class. 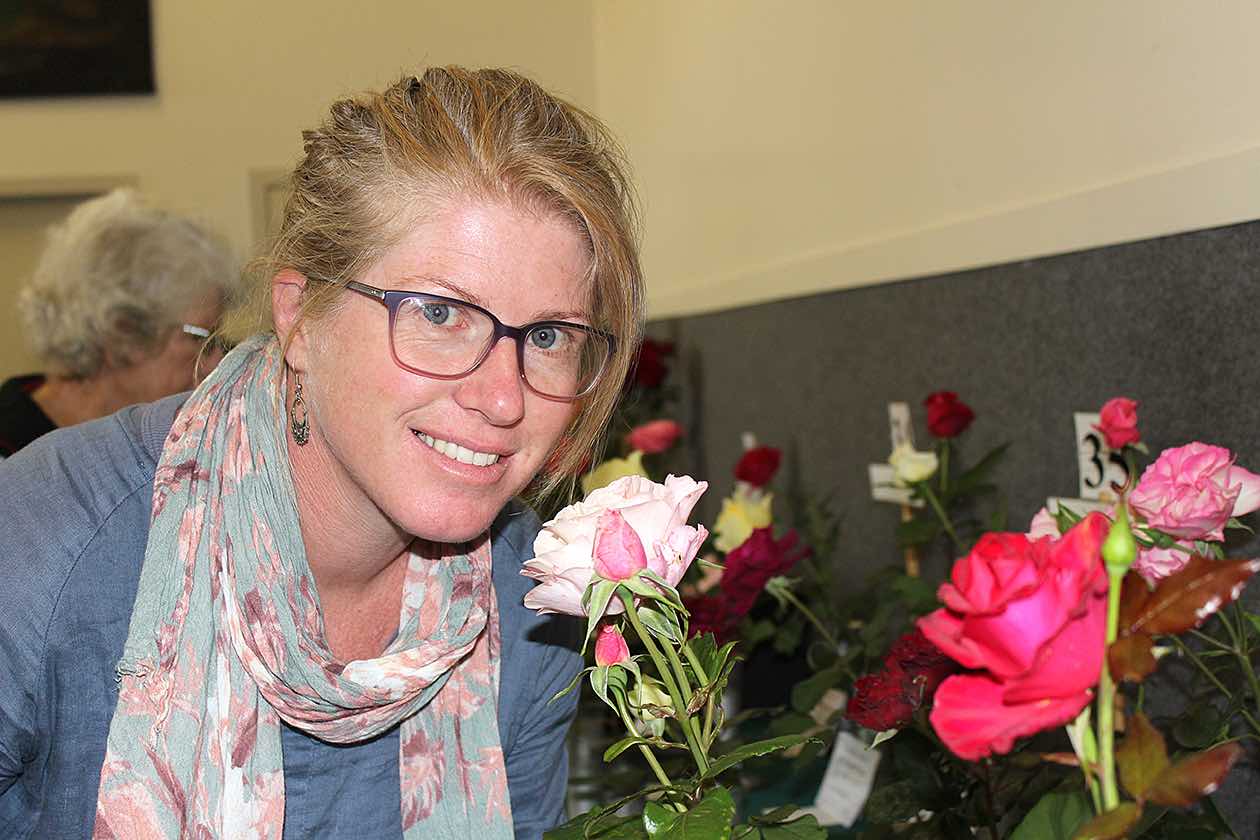 Lisa Fisher was a winner the single large or small stem of rose novice class – but she’s no stranger to the garden, having previously looked after the blooms in what is now Henley Hotel in Cambridge. 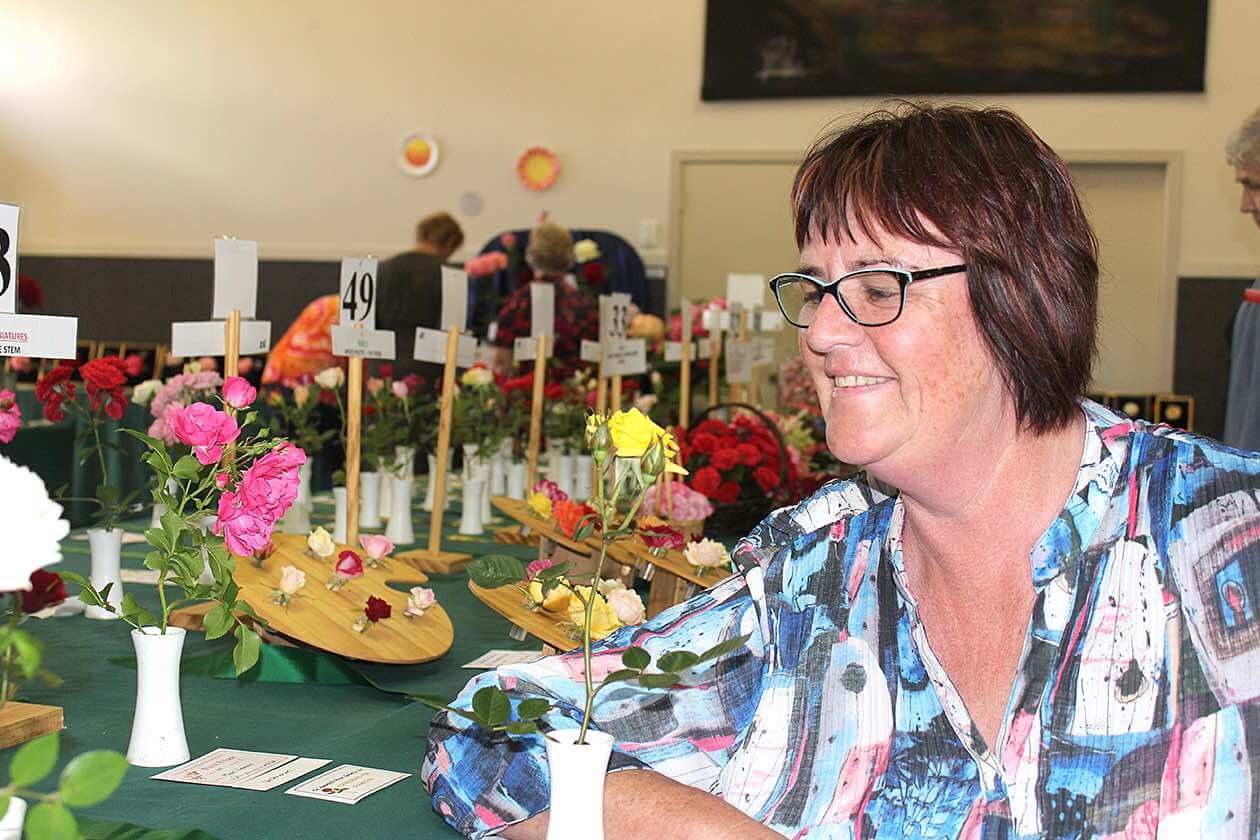 Te Awamutu Camera Club member Tess Smith is usually behind the camera – but she picked up six placings, including a win in the miniature exhibition bloom section. 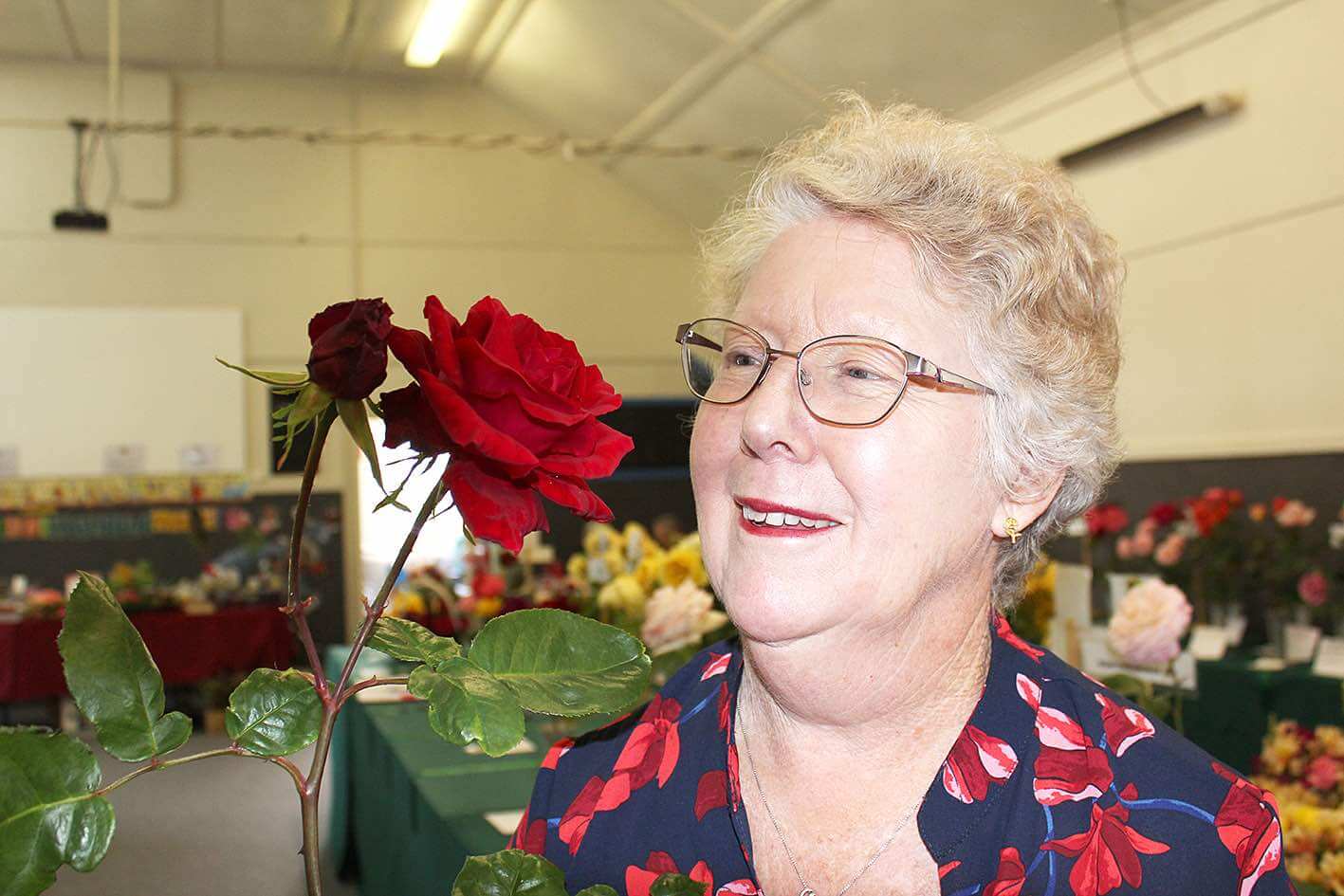 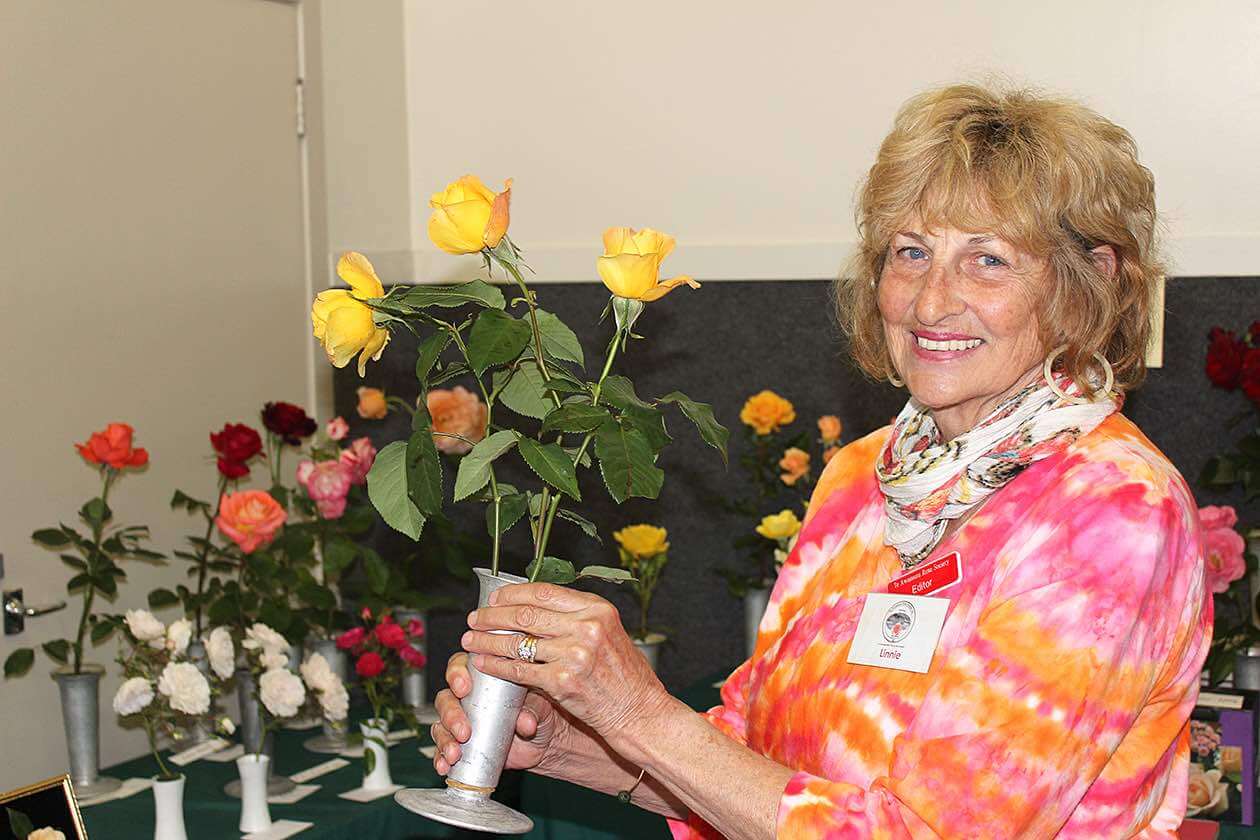 Lisa Fisher was a winner the single large or small stem of rose novice class – but she’s no stranger to the garden, having previously looked after the blooms in what is now Henley Hotel in Cambridge.

It’s not much a rose by any other name as a rose with no name.

When Lorraine Flynn moved into her Pakuru St home in Te Awamutu 36 years ago the garden boasted six rose bushes.

Today there are considerably more.

One of those six was judged best in show when the Te Awamutu Rose Society shook off the Covid blues to hold its first spring show in two years last week.

Lorraine, a lover of roses, admits she has no idea what name of the successful rose it.

She does know that it’s prolific – and to her surprise, it’s now champion stock.

Lorraine said she had entered the competition in past years but this was her first win.

The society’s 58th annual show, in the Baptist Church Hall in Teasdale St, was a successful event despite Covid enforced time off – and the fact that the weather was hardly kind.

The late frost which cost Waipā berry growers a sizeable slice of their crop in October also battered the roses.

And on the day the show opened a strong wind threatened to play havoc with the displays and certificates carefully laid out on table each time a certain door was opened.

Tess Smith, who was among the winners, noted that the society was lucky to have a show after a two year hiatus.

The society has thrown out a challenge to the community this year as it looks to reinforce the town’s Rosetown moniker. It is running competition encouraging the public to count the number of rose bushes in the town.

Society newsletter editor Linnie Jones says Te Awamutu is a fantastic place to grow roses and it is known worldwide – but the numbers of growers in the town has slipped in recent times.

“We’ve got perfect conditions and great growers,” she said.

Murray Downs, with Matawhero Magic and Selena Horn-Jones with Alyssa Pearl won the senior and junior sections of the public entry class where residents were invited to bring along a rose from their garden.

Jan Lusty collected the greatest number of points in the show